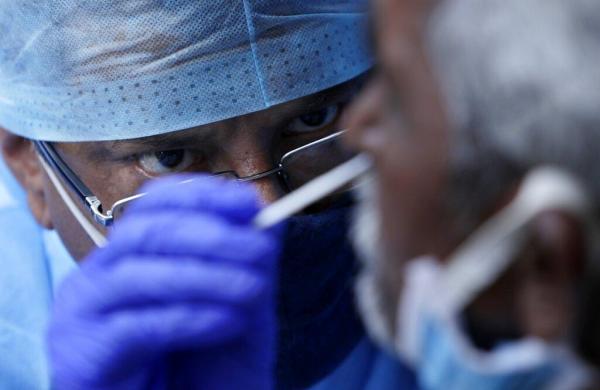 By Express News Service
BHOPAL: Aiming to contain the spread of COVID-19 infection during the festival of colors, Holi, the Burhanpur district of Madhya Pradesh is set to launch a campaign Majha Parivar-Majhi Holi to discourage residents of the district from traveling to adjoining Maharashtra for celebrating the festival of colours with relatives.

“The Burhanpur district is bordered by Maharashtra’s three COVID-19 sensitive districts, including Jalgaon, Buldhana and Amravati district. Population in our district has close cultural relations with these bordering districts of Maharashtra, owing to which they travel to their relatives’ place in these Maharashtra districts on Holi, which increases the risk of further spread of the killer virus.”

“Though movement of buses to and from Maharashtra has been banned for the time being, people in our district even use two-wheelers to travel to close relatives in Maharashtra for Holi, which has to be discouraged this time, keeping in mind the grim COVID-19 situation in those districts,” Burhanpur district collector Praveen Singh told The New Indian Express on Sunday.

“We’ll launch the Majha Parivar Majhi Holi/Majha Kutumb-Majhi Holi campaign from March 23 or March 24, during which we’ll motivate residents of Burhanpur to celebrate Holi this time with their family in Burhanpur only, instead of traveling to adjoining Maharashtra for Holi. Another tagline of the campaign is Majhe Kutumb-Majhi Jawabdari, Rang Taalaa Corona Taalaa (my family is my responsibility, avoid Holi outside family to avoid Coronavirus infection),” Singh said.

During the campaign, not only will posters be put across Burhanpur, but social media too will be proactively used to further the campaign to every possible citizen in the district. Special shapaths (pledges) will also be administered in villages to discourage villagers from traveling to Maharashtra on Holi.

Importantly, the Burhanpur district’s planned campaign has already been appreciated by the MP CM Shivraj Singh Chouhan at a recent COVID-19 review meeting.

“During the previous peak also, we had run a similar campaign to discourage Burhanpur residents from traveling to Maharashtra and other COVID-19 hotspots of MP, which had helped us to contain the spread of the infection at that time,” the Burhanpur district collector said.

The campaign to discourage Burhanpur residents from traveling to adjoining Maharashtra is the outcome of the latest spurt analysis of cases reported in Burhanpur – which is among the top ten districts of MP, which has been reporting a sudden spike in cases during the last 10-15 days. Analysis based on contact tracing of the new cases has revealed that as many as 65% to 70% of the new cases in the district are the result of COVID-19 spurt in Maharashtra.

“Not only does our population have close cultural relations with Maharashtra, but most youngsters are studying in Surat or Pune, owing to which sudden spurt in cases in Surat in Gujarat or Pune and other districts of Maharashtra have spiraling effect in Burhanpur district. If we’re able to contain or limit rapid rise in new cases till April 10, we’ll win the battle against the fresh wave of the killer infection,” he maintained.

Though Burhanpur district has so far reported total 1186 cases, which is compared very less in terms of total cases in other districts, it’s the presently active cases figure of 141 which has put Burhanpur among the top ten MP districts with highest number of active cases.