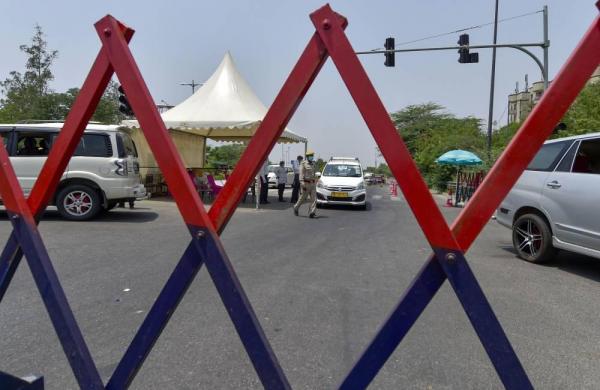 By Express News Service
BHOPAL: Curfew was imposed in the Murwas police station area of Vidisha district of Madhya Pradesh, after tension in communally sensitive Murwas village, following the visit of Bajrang Dal and Vishwa Hindu Parishad leaders on Sunday.

A group of Bajrang Dal, Vishwa Hindu Parishad leaders visited the Murwas village on Sunday, reportedly to meet the members of Valmiki community, whose prominent member and village sarpanch’s husband Santram Valmiki was mowed down under a tractor on March 18 by members of a family headed one Faqeer Ahmad.

The March 18 killing was the fallout of a dispute related to encroachment on a forest department land, after which the right-wing Hindu outfits and local BJP MLA Umakant Sharma had been demanding the arrest of the five accused, four of whom belonged to one family only. All five accused in the matter have already been arrested.

The murdered Santram Valmiki was reportedly a supporter of the local BJP MLA Umakant Sharma, who is the brother Vyapam scam accused ex-MP minister Laxmikant Sharma.

The visit reportedly triggered tension in the village, after which the right-wing Hindu outfits’ leaders’ vehicles were attacked by members of the other community.

Members of the minority community, who live in the village, protested the visit of the leaders of the right-wing outfit in the village. They alleged that the visit was part of a planned move to disturb the communal amity in the area. They further alleged that part of their properties, including part of agricultural fields, were set ablaze.

On the other hand, VHP leader Jitendra Chouhan alleged that VHP leaders led by Prant Sangathan Mantri Khagendra Bhargava were returning after meeting the Valmiki community people when men from the other community attacked their vehicles with stones and even indulged in the firing.

“We demand the immediate arrest of those involved in attacking our leaders’ vehicles, failing which we’ll protest in all districts on Monday,” Chouhan said.

While confirming that the vehicles were attacked by unidentified men, the Vidisha district police superintendent Vinayak Verma said a case of rioting has been lodged against unidentified men. “We’re also probing allegations of firing. Curfew has been imposed in the area and police deployed in strength, after which the situation is now under control.”

The SP Vidisha, however, denied allegations about properties having been set afire in the village. “The videos in the social media showing some fire in fields, possibly relate to the land from which encroachment was recently removed.”

According to Vidisha police sources, the police are also investigating a video pertaining to recent protest led by local BJP MLA Umakant Sharma over Santram Valmiki’s March 18 killing. The video contains objectionable slogans against a particular community being shouted in the presence of the ruling party MLA.