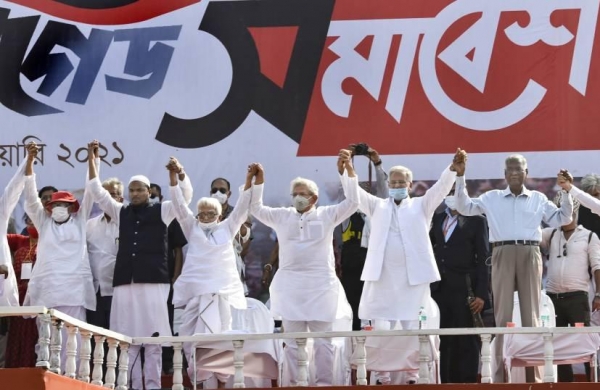 Express News Service
KOLKATA:  A day after Congress leader Adhir Ranjan Chowdhury said his party was yet to forge an alliance with the newly formed Indian Secular Front (ISF) in West Bengal, ISF founder Abbas Siddiqui on Sunday made it clear that his party would not join hands with the grand old party if his demands are not met ahead of the Assembly polls.

Proclaiming support for the Left Front (LF) and its allies in the state, Siddiqui, however, said Bengal will get the better of the BJP and “its B-team Mamata Banerjee” in the election.

The ISF has sealed a seat-sharing agreement with the Left Front for the Assembly election, while talks with Congress are underway.

Addressing a mega joint rally at the Brigade Parade Ground in Kolkata, Siddiqui, a Muslim cleric who launched the ISF last month, announced that his supporters will vote for the candidates of the CPI(M) and its partners and cautioned the Congress over the ongoing seat-sharing deal, asking it to arrive at a decision soon.

“Many are thinking that I am supporting the LF and not talking about the Congress. Let me clear that the ISF has demanded what it deserves. I am here to secure my stake not to satisfy anyone. I am here (in politics) to be a partner, not for any kind of appeasement. I am here to get my rightful claims,” he said.

“I didn’t speak about the Congress. I am here (in politics) to be a partner, not for any appeasement. I am here to get my rightful claims,” Siddiqui said with state Congress president Adhir Chowdhury present on the dais.

So far, the Left Front has agreed on giving 91 seats to Congress and 30 seats to the ISF. However, the ISF is insisting on 3-4 more seats, including the high-profile constituency of Nandigram.

The Congress refused to give two of the seats demanded by Siddiqui as the party has its sitting MLAs there.

At the rally, ISF supporters gave Siddiqui a rousing welcome as he appeared on the stage when Chowdhury was in the middle of his speech.

The Congress leader then sought to cut it short. He, however, continued the address after Left leaders such as Biman Bose and Md Salim persuaded him.

The LF called for “knocking out the TMC and BJP and stressed the need for a third alternative to provide a “Janhit Sarkar” (people’s welfare government) to ensure employment generation.

“We have heard from our sources that Sonia Gandhi wants this grand alliance. But a Congress leader from Bengal is creating problems. We will wait for a few more days and then take a call. We can’t wait till eternity,” he said on the sidelines of the rally.

Reacting to the comments, Chowdhury said the Congress wouldn’t take decisions based on threats and intimidation by “some Siddiqui”.

“We can’t decide based on what some Siddiqui is saying. We are having a formal alliance with the Left. Let us first get a clear picture of the number of seats we are getting from the Left, then, we can share it with someone else. We deputed Abdul Mannan to talk to the ISF and look into their demands. Let’s see,” he told reporters at the state Congress office.

The discomfort on the dais at the rally was visible with Chowdhury and Siddiqui not speaking to each other.

Siddiqui got onto the stage when Chowdhury was addressing the rally.

Seeing him on the dais, ISF supporters burst into cheer, disrupting the Congress leader’s speech who then sought to cut it short.

However, Chowdhury continued the address after Left leaders such as Biman Bose and Md Salim persuaded him.

“Nothing of that sort. I merely told them (Salim and Bose) if I would temporarily stop speaking and resume later on,” the Chowdhury later clarified.

The CPI(M) said that it was working with the alliance partners to iron out the differences.

“Left would act as the cement of this alliance and the issues will be sorted out,” Salim said.

According to sources, the ISF has demanded a few seats in once Congress bastion Malda and Chowdhury’s stronghold Murshidabad that the Congress won in the 2016 assembly polls.

Siddiqui joining the Left-Congress alliance has given it an edge in the West Bengal polls, mostly seen as a bipolar contest between the Trinamool Congress and BJP.

Siddiqui, a pirzada at Furfura Sharif — one of the holiest shrines among Bengali Muslims, created a flutter by meeting AIMIM chief Asaduddin Owaisi ahead of the elections but ditched him for the Left-Congress.

West Bengal has a 30 per cent Muslim population a deciding factor in around 100-110 seats.

In case of a close contest, the Left-Congress-ISF alliance will become a deciding factor.

Elections for the West Bengal assembly will be held in eight phases, up from seven last time, beginning with polling for 30 seats on March 27.

The Lok Janshakti Party has announced that it will try its electoral luck in the Bengal and Assam Assembly elections to take on the JDU and other parties.

The decision was taken at a meeting between LJP chief Chirag Paswan and his party leaders at Patna.