Mamata will be out of power on May 2: Shivraj Singh Chouhan 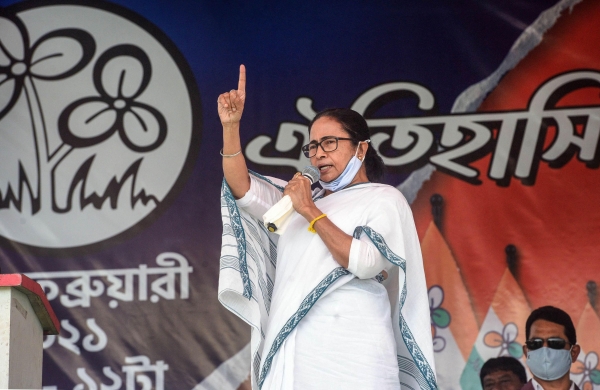 By PTI
KOLKATA: Madhya Pradesh Chief Minister Shivraj Singh Chouhan asserted on Sunday that the BJP will win the upcoming assembly elections in West Bengal, and Mamata Banerjee will lose her chief ministership on May 2 — the day the votes will be counted.

Offering puja at the Dakshineswar Temple on the banks of the Hooghly on the northern fringes of Kolkata, Chouhan said he prayed for a violence-free Bengal.

“After the misrule by Congress and CPI(M), resulting in Bengal’s decline over the years, the state of affairs touched a new bottom with cut money and corruption culture during Trinamool Congress’s rule. People of the state want a change and will bring BJP to power this time,” he told reporters.

“On May 2, Didi (Mamata Banerjee) will be out of power and BJP will replace her,” he added.

Accompanied by a few BJP leaders, Chouhan visited the 19th-century temple around 11 am.

“This place is associated with Ramakrishna Paramahamsa and Maa Sarada. This is also the land of Swami Vivekananda. Visiting this place brings in a divine feeling,” the Madhya Pradesh chief minister said.

Chouhan alleged that 130 BJP activists were killed in the state in the last few years.

“Their sacrifices will not go in vain,” he said. Chouhan, like several other BJP chief ministers and Union ministers, was visiting the state to campaign for the party ahead of the upcoming assembly elections.

The Trinamool Congress slammed Chouhan’s comments, stating that they were baseless allegations.

“Can you imagine someone visiting the temple of Maa Kali to make a political statement? This is only possible for the BJP,” state minister and senior TMC leader Firhad Hakim said.