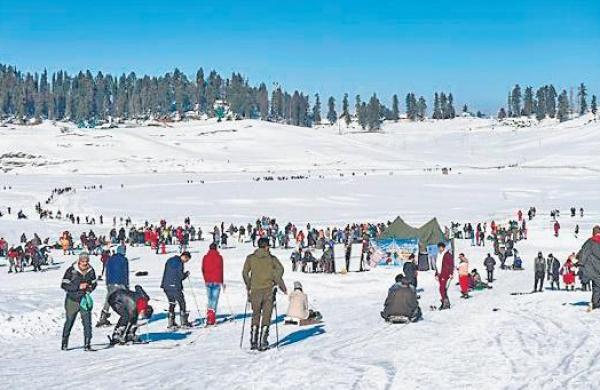 Express News Service
SRINAGAR: It seems the good days are back again. Tourists are returning to the militancy-hit Jammu and Kashmir. The Valley’s famed ski resort of Gulmarg is sold out, as all hotels are booked till the end of April.With heavy snowfall this year, the tourist resort of Gulmarg at an altitude of 8,000 feet has been a major attraction this winter and witnessed 100 per cent occupancy on Christmas and New Year eve.

Mushtaq Shah, spokesman of Gulmarg Hoteliers Club, said all hotels are booked. “Over 900 hotel rooms including J&K Tourism Department huts in Gulmarg are booked till April-end. All classes of tourists including high-spending tourists and budget tourists are coming to Gulmarg,” he said.

Gulmarg was always a four-season destination but in the the last few years, it witnessed lesser footfall in the winters.  According to Shah, after the Khelo India Winter Games in Gulmarg last year, the national skiers got first-hand information about the place and its beauty. “It sent a positive message and players and people realised that Gulmarg has got the infrastructure that is available in other parts of the world.” He said since people can’t visit foreign countries due to Covid-19, Indian travellers are coming to Gulmarg in bigger numbers.

The second edition of Khelo India National Winter Games will be held in Gulmarg from February 26 to March 2 and hoteliers are hopeful it will be an additional boost for the tourism sector. “It sends a message that Kashmir is a safe tourist destination. And it had always been a cheaper option compared to other parts of the world,” said another hotelier.

Director of Tourism Kashmir, GN Itoo said packed hotels is a positive development. “Gulmarg used to be a winter tourism destination and after snowfall, footfall to the ski resort would drop considerably. But due to Khelo India, publicity programmes and roadshows, Gulmarg is agian emerging as a favourite tourism destination,” he said.