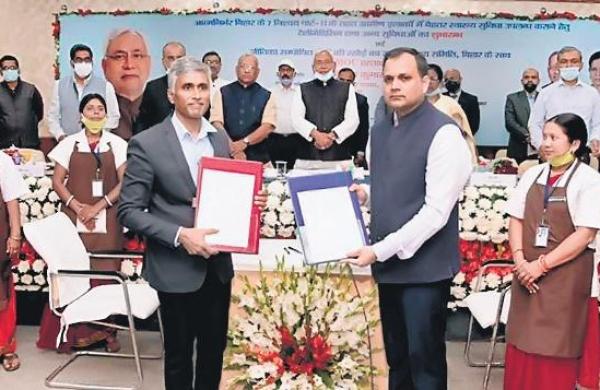 Express News Service
MoU signed for Didi Ki RasoiLast Sunday witnessed the beginning of a new initiative to provide food to in-patients in all government hospitals after a MoU was signed by the Bihar Rural Livelihood Promotional Society alias JEEVIKA and the state health department. Under the MoU, women associated with the JEEVIKA -supported SHGs, will run the canteens called ‘Didi Ki Rasoi” in every government hospital to provide free food to in-patients in the state. . CEO of JEEVIKA Bala Murgan D said ‘Didi Ka Rasoi’ were  first started on a pilot basis in seven districts,  including Vaishali, Buxar, Sheohar, Saharsa, Gaya, Shekhpura and Purnia.

Pashu Shakhis for better upbringing of goatsKnown as ‘Pashu Sakhi’ (friends of cattles), more than 1,264 women are helping goat-rearers in Bihar’s interiors under the JEEVIKA initiative. The CEO of JEEVIKA, Bala Murgan D said the women trained as Pashu Shakhi are providing information on goat rearing practices to 1.15 lakh households in 85 blocks of 14 districts in the initial phase. After being trained as Pashu Sakhi, they have been roped in to promote healthy practices of goat-rearing on fixed honorariums for a period of three years. They educate goat-rearers to develop the best breeding practices.

Letters seeking Lalu’s release sent to PrezFormer Health Minister of the state Tej Pratap Yadav, the elder son of imprisoned Rashtriya Janata Dal chief Lalu Prasad, has sent lakhs of postcards titled ‘Aazadi Patras’ to the President seeking release of his father from the prison. Upon his call, lakhs of Lalu supporters and RJD leaders have sent postcards to the President urging him to ensure the release of their leader, who is languishing in Ranchi Central Jail after being convicted in the multi-crore fodder scam. Tej Pratap started sending postcards collected form party leaders and others on the day of Lalu’s  birthday. Several bail pleas by the former chief minister have been turned down.