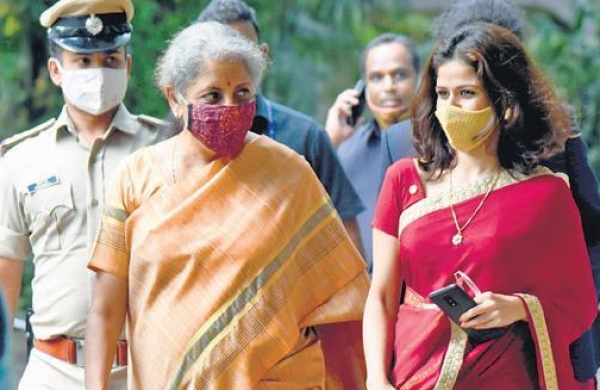 By Express News Service
BENGALURU : “India has sent Covid vaccines to over 100 countries and this is a classic example of how the private sector stood up to strengthen the image of India. It gives the message that we have developed vaccines, done vaccine research and scaled up production, based on the demand which is expanding by the minute,” said Union Finance Minister Nirmala Sitharaman, speaking at a post-budget interaction held by the Bangalore Chamber of Industry and Commerce in Bengaluru on Sunday.

“This shows inherently what India can contribute when the private and government sectors work together in addressing what is an important, life-saving intervention. With this, we are saying that India’s growing and aspiring needs and demands across sectors cannot be served just by state and central governments. The most important component is participation of the private sector,” she said.

Taking the example of Covid vaccine where India has become a world leader, she said that is how the country must approach its responsibilities which will be incomplete until the government plays the role of a facilitator and unless the private sector plays its role as a key driver. This is the message of the budget, she added.

Stimulus package“The budget has set the path for the next decade and for the current year too, as the stimulus package has been largely dependent on government borrowing. This was done aiming at sectors that provide a multiplier effect such as infrastructure. Public expenditure will be undertaken so the core sectors can be triggered for ripple effect on the economy,” she said.

The government has taken measures to manage debt to GDP ratio, fiscal management and other indicators of a healthy economy in such a way that, fiscal deficit will be brought to a healthy level soon, she said.

‘India can attract $100 bn remittances’ Health sector can transform a country and it is the largest industry as well as employer in the world, being a $10 trillion industry, said Dr Devi Shetty, chairman and founder, Narayana Health at an interaction with Nirmala Sitharaman. India needs a national strategy to attract $100 billion of annual remittance from health workers within five years. This can be fuelled by Indian doctors, nurses, technicians and other healthcare workers, he said.