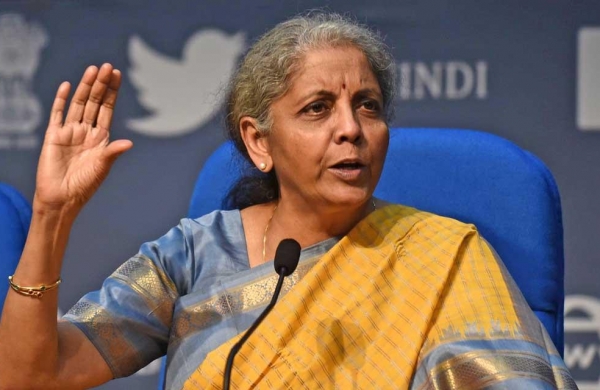 By Express News Service
Union Finance Minister Nirmala Sitharaman on Friday accused the opposition parties of spreading false propaganda about the contentious farm laws and said they were protesting only to benefit middlemen.Addressing the traders’ cell of Tamil Nadu BJP here, she also said those who were causing hindrance to the progress of the growth of Tamil Nadu were now criticising Prime Minister Narendra Modi’s government at the Centre.

“How can one answer to a false propaganda that through the farmer’s law, a farmer could lose his land?”, she asked, referring to the protests demanding repeal of the laws. She said that they were opposing the laws only to benefit middle men. In an apparent counter to the repeated attack by DMK that Tamil Nadu’s interests had been neglected by the Centre, she said, “We are not those who are standing as an obstacle in the progress of a State. Tamil Nadu should develop.” The State required good governance, she added.

Noting that there was not even one Parliamentarian representing Tamil Nadu in PM Modi’s Cabinet, the Union Minister said, despite that, he was executing various development projects for the welfare of the State.Referring to the ambitious defence corridor project in the State, she said Uttar Pradesh was now looking at Tamil Nadu on how they could compete with it in the production of defence parts. “This is called a healthy competition. When this happens, every State progresses. We are not doing any politics that pose an obstacle in the progress of a State,” the Finance Minister said.

Pointing to the announcement of Modi that the Centre had accepted the Devendrakula Vellalar community to be listed only by their collective, traditional name of ‘Devendrakula Vellalar” and not by the names of seven sub-sects, Sitharaman said it was the BJP that gave prominent posts in government to those belonging to all communities.

Which other party gave prominent posts in the government to those who were not belonging to any ‘forward castes’, she asked, slamming the opposition parties for indulging in ‘irresponsible politics’. She said several BJP leaders such as former State unit chief L Ganesan visited every nook and corner of the State for the growth of the party. “Even at that time (when the party was not in power) we did not forget the people of Tamil Nadu, even today (when we are in power) we have not forgotten the people of Tamil Nadu (in announcing development projects for the State),” she said.