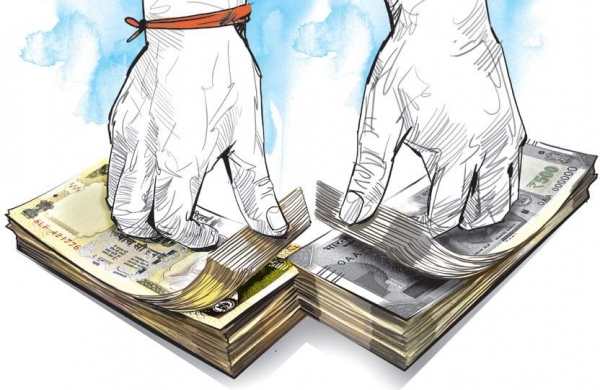 By PTI
NEW DELHI: The ED has attached assets worth over Rs 280 crore in connection with a money-laundering case related to “illegal” acquisition of land in Haryana’s Manesar between 2004 and 2007 with the alleged connivance of senior government functionaries and bureaucrats.

The central probe agency said it has issued a provisional order for the attachment of the properties, registered in the name of various accused in the case, under the provisions of the Prevention of Money Laundering Act (PMLA).

The role of Congress leader and former Haryana chief minister Bhupinder Singh Hooda in this instance is under the scanner of the agency.

The attached assets include a 54-per cent portion of a project in the name of Dove Infrastructure Private Limited of Atul Bansal and his group companies at Faridabad worth Rs 108.86 crore.

A 50-per cent portion in the “Business Bay Project” in the name of Seriatim Land and Housing Private Limited of Bansal and his group companies worth Rs 78.09 crore, flats and fixed deposit receipts of Anglique International Limited worth Rs 3.39 crore and Rs 25.53 crore of refund from the HSIIDC sanctioned to Guru Nanak Infrastructures Developers Private Limited have also been attached.

Also, 13.77 acres and 5.65 acres of land valued at Rs 29.48 crore of the Frontier Home Developers Private Limited, 20 flats worth Rs 22.72 crore of the same company and 95.09 bighas of agricultural land at Behror and Neemrana in Rajasthan worth Rs 13.31 crore of Lalit Modi have also been attached, the Enforcement Directorate (ED) said in a statement.

A total of three — one primary and two supplementary — chargesheets have so far been filed by the ED in the case against a total of 30 accused and a special PMLA court in Panchkula has taken cognisance of these prosecution complaints.

The ED case was filed after studying a 2015 FIR lodged by the Central Bureau of Investigation (CBI) against the accused.

“It was alleged in the FIR that the government of Haryana had issued a notification under section 4 of the Land Acquisition Act, 1894 on August 27, 2004 and a notification under section 6 of the said Act on August 25, 2005 for the acquisition of land measuring about 912 acres for setting up an industrial model township in villages Ike Manesar, Naurangpur and Lakhnoula in Gurugram district.

“A large number of land owners, in distress, had to sell about 400 acres of their land at throwaway prices to private builders, who caused a wrongful loss to the land owners of these villages,” the ED said.

The agency’s probe found that the land was later freed from compulsory acquisition by the state government as a result of a “conspiracy” by politicians, bureaucrats and private builders, causing a huge loss to the land owners and the state exchequer.

“Most of the land were purchased by the ABWIL Group controlled by Atul Bansal and after obtaining licences, ABWIL had sold the licensed/un-licensed land and licences to the other private persons/developers, thus making profit worth crores.

“ED investigation revealed that the above properties worth Rs 281.42 crore are proceeds of crime under the PMLA,” the agency said.