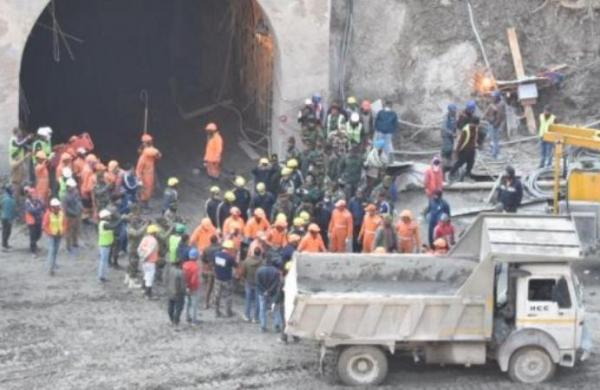 Express News Service
DEHRADUN: Multi-agency reach operations are still on in tunnels of Tapovan Hydropower Project with 6 bodies recovered on Sunday after clearing sludge from the 180-meter tunnel.

Meanwhile, the drilling a hole of 1 ft diameter on the ground of the tunnel has failed, said the officials who were present in the meeting to review the progress of rescue operations.

Ravinath Raman, commissioner of Garhwal division of Uttarakhand said, “A total of 13 bodies were recovered today.  Among them, 7 were recovered from Rishi Ganga power plant and 6 from Tapovan tunnel. 155 people are missing. The rescue operations are going on full swing.”

A total of 51 bodies have been recovered till date including a body part recovered from Rudraprayag on Sunday — over 130kms from the epicentre of Feb 7 flashfloods.

Swati Bhadauria, district magistrate of Chamoli district told TOI, “We have total 7 ambulances, and a chopper on standby to provide immediate medical assistance and transportation in case anyone is found alive. We are also continuing our relief operations in effected villages using air support.”

Meanwhile, vertical drilling of Tapovan tunnel with almost 1 feet wide hole to reach Silt Filtration Tunnel (SFT) has been aborted for now after bodies were found in the main tunnel.

The officials of the NTPC Limited have also launched an operation in the vicinity of Tapovan barrage to recover bodies of the workers. A video has been doing rounds of the flash floods in which the workers can be seen struggling to escape losing their battle to the unprecedented flash floods.

Central Water Commission is conducting simulation studies on the lake formed in the Rishi Ganga river, 8kms upstream from Raini village and also examining the possibility of carrying out a controlled blast to drain out the water.

A trolly bridge has also been installed in Tapovan by a combined team of state public works department and the Indian Army which will carry one person at a time are being. The work to install two more bridges is on in Raini and Juwagad village to connect the villages with the rest of the world.

The relatives suffer in anticipation waiting for the worst.  Kailash Yadav arrived at the spot from Siwan district of Bihar in the hope to receive at least the mortal remains of his brother Subhash Yadav who worked as a welder in the project.

“Now I don’t have confidence that he will be found alive. I hope at least his body will be found so that I can take him back to my parents,” said an emotional Kailash.