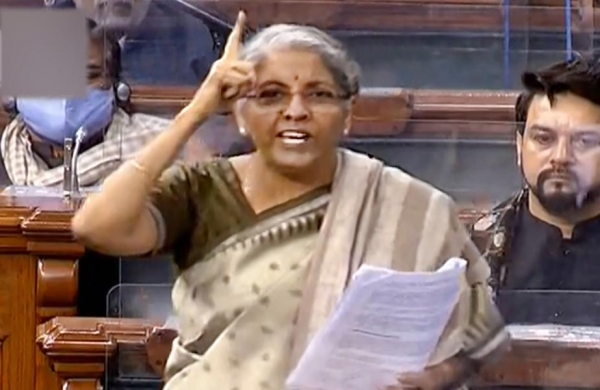 By Express News Service
NEW DELHI:  In a scathing counter-attack on Rahul Gandhi for his relentless targeting of the government over the farm laws and the LAC standoff with China, Union Finance Minister Nirmala Sithraman on Saturday dubbed the former Congress president “doomsday man for India”.

During her reply to the Budget discussion in the Lok Sabha, Sitharaman said the former Congress chief was constantly insulting constitutional functionaries and institutions and creating fake narratives on various issues, betraying a lack of belief in a democratically elected parliamentary system.

Responding to the allegations of the government promoting ‘crony capitalism’, the minister asserted that the “Hum Do, Hamare Do” jibe that Gandhi had been taking on the government was more apt for his family.

“In banks, you did phone banking and left huge NPAs. This is one tendency, create institutions and use them for ‘Hum Do Hamare Do’ and at the end of the day keep accusing others. Who are our cronies? Our cronies are the common people of this country… Where are the cronies? They’re hiding probably in the shadow of that party which has been rejected by the people,” said a combative Sitharaman.

The minister added that the Congress “makes allegations, use abusive language, but when under parliamentary procedure they have to respond to… they only shout and walk out”.  The Congress strongly objected to some of the remarks made by the minister indirectly referring to Gandhi’s family members which were later expunged by the Chair.

A Congress MP also moved a breach of privilege notice over the “doomsday man” remark. Sitharaman said the Congress leader has been in the habit of insulting the institution of the prime minister, recalling that he had torn off a copy of an ordinance promulgated by his own party’s government led by the then PM Manmohan Singh.

“I wanted to know from the Congress why it took a U-turn on the farm laws but no reply came,” she said. She said that Gandhi did not say why Congress governments in Rajasthan, Madhya Pradesh and Chhattisgarh did not waive farm loans as promised in their manifesto.

‘HE DEMEANED INDIA DURING LAC CRISIS’

The Finance Minister alleged that Gandhi’s policy was to constantly say things that will demean and insult India. “When there was a crisis on the border, instead of  talking to us, they were talking to the (Chinese) Embassy and inquiring about the border,” she said.

Congress MP TN Prathapan has submitted a notice of breach of privilege against the finance minister for insulting the party leader. The notice said Sitharaman accused Gandhi of having joined fringe elements and demeaning the country.