So far, 86 lakh metric tonnes of paddy has been purchased in Chhattisgarh – Chief Minister Mr. Baghel 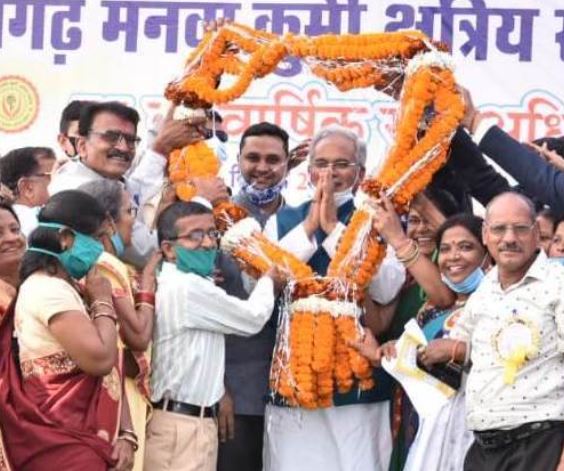 Bhupesh Baghel attended the 75th annual session of the Manwa Kurmi Kshatriya Samaj Durg held at village Chetuva in Dhamdha block of Durg district today. On the occasion, Chief Minister Mr. Baghel said that 86 lakh metric tonnes of paddy had been purchased so far in the current season in the state, which have been purchased so far and there is still one week left. The farmers have returned to farming from the state government’s farmer friendly policies, whether the support price of paddy purchase or loan waiver of farmers or agricultural reforms, the state government’s schemes have had a huge impact and this effect happened this season Paddy is clearly visible in the purchase.
The Chief Minister said that despite the lack of gunny bags, we did not let the paddy purchase stop and the record paddy was purchased. We repeatedly requested the Center to send the gunny bags, but it was decided to give only one and a half lakhs of gunny bags and 40 thousand gunny bags were still not available. On the occasion, the Chief Minister said that through the Rajiv Gandhi Kisan Nyay Yojana, we provided support to the farmers. Chhattisgarh government schemes have brought economic prosperity to the farmers. There is satisfaction in farmers. Due to the policies of the Chhattisgarh government, the agricultural economy has improved and its effect has also been shown on the market. In this way all classes have developed due to the policies of the government.
Chief Minister Mr. Baghel said that we have done farming for a lifetime and understand the suffering of farmers. Realizing the pain of farmers, we decided that concrete decisions need to be taken in the interest of agriculture. It is very important that farmers get adequate value for their produce. We have taken the historic decision of debt waiver of farmers, which is the biggest decision of debt waiver of any state till now. Whether it is a small farmer or a big farmer, we have forgiven everyone’s debt which was a historic decision. The Chief Minister said on this occasion that through the Rajiv Gandhi Kisan Nyaya Yojana, we decided to provide agricultural input assistance to farmers in 4 installments. This assistance amount was given on such occasions which were the most necessary opportunities for the farmers, the first of which is the time when farming starts, then the amount was sent to the farmers’ account on May 21 so that it can start farming. . The third installment was given at the time of lavishing. We will give the last installment before 31 March. On this occasion, Higher Education Minister Shri Umesh Patel said that despite the shortage of gunny bags, the Chief Minister successfully implemented the paddy purchase scheme, this was a huge task. Today, the satisfaction of the farmers on the face of the state government schemes is deeply affected. On this occasion, the Chief Minister also inspected Gowthan located in Murmunda, was impressed by the arrangement here and said that make Gowthan self-sufficient. The basis of rural economy rests in the development of Gothan.