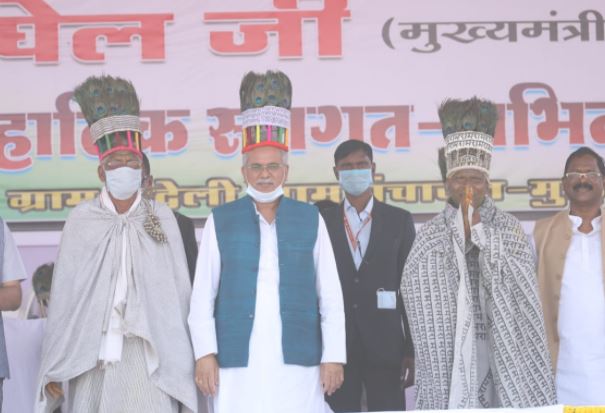 Bhupesh Baghel today attended the All India Ramnami Mahasabha Bade Bhajan Mela organized in village-Nandeli of Sarangarh development block of Raigad district. He worshiped Jayastambha. The Chief Minister announced the construction of a 50-bed hospital in Sarangarh, to make Kosir a sub-tehsil, and a reservoir in Bhadisar.
Chief Minister Mr. Baghel, where did you find the couplets of Sant Kabir, I am in your possession, said that the people of Ramnami society got Ram’s name in their body and installed it in themselves instead of finding God outside. is. He said that people of Ramnami society practice hard work. Rama’s name is written all over the body. Odhni also carries the name of Rama. The state government is working to cherish, cherish and carry forward the rich cultural heritage of Chhattisgarh. Ram Van Gaman Path is being constructed by spending about 135 crores. In which 9 places are being developed as tourist destinations this year.
Chief Minister Mr. Baghel said that the government is continuously taking beneficial decisions for the farmers. All necessary arrangements have been made for paddy purchase in support price. So far 86 lakh metric tonnes of paddy has been purchased this year. New committees and paddy buying centers have been opened for the convenient procurement of paddy. Due to the conditions arising due to corona, the supply of gunny bags was affected, so the purchase of gunny bags with ration bags and plastic gunny bags was approved so that the purchase would not be affected. Work is being done to start the jute mill located in Raigad. So that people can get employment and the shortage of gunny bags can also be removed. Under the Rajiv Gandhi Kisan Nyay Yojana, the input incentive amount of about Rs 5750 crore is being deposited directly to the paddy growing farmers in their account. 4500 crore rupees have been given in three installments under the scheme. The fourth installment will be given before 31 March.
The Chief Minister said that for the first time in the country, the Godhan Nyaya Yojana was launched to strengthen the rural economy. Under which the cow dung is being purchased for two rupees a kilo. Due to this, additional income is being provided to the cowherds, farmers and villagers. With the creation of vermi compost, women have got a new way of self-reliance. Earlier people used to buy motorcycles by selling paddy, now they are buying motorcycles only by selling cow dung. Vermi compost is promoting organic farming. The fertility of the land is increasing. The quality of crops is also improving.