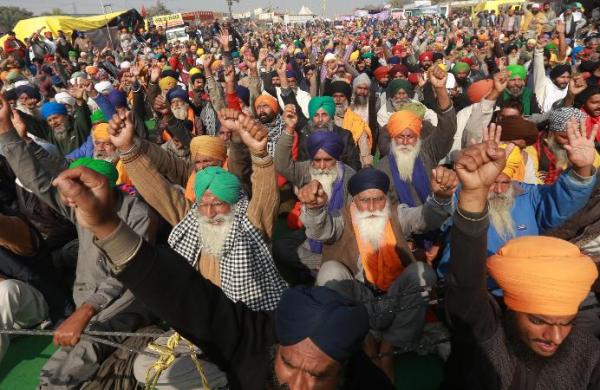 By Express News Service
NEW DELHI/CHANDIGARH:  The tenth round of talks with the protesting farmers on Wednesday opened a window of opportunity to break the deadlock on the contentious farm laws with the Centre proposing to constitute a new committee as also keeping the laws on hold for two years or more and the farmers agreeing to consider them.

The two sides will meet again on Friday, when the farmers are expected to spell out their stand on the suggestions after holding consultations among themselves on Thursday.

The fact that the government came out with new proposals and the farmers agreed to examine them are being seen as signs of accommodation from both sides.

Until Wednesday, the government’s consistent stand was that it was ready to amend the laws while the farmers remained firm in their repeal-or-nothing demand.

Sources said the Centre, during the meeting, urged the farmers to consider its proposal for an hour separately. The two sides broke off into different rooms following which the farmer unions agreed to consider the offer. However, they insisted that their demand of repealing the laws still stands.

Krantikari Kisan Union president Darshan Pal said, “Just because we have decided to discuss this new proposal of the government and decided to hold a string of meetings tomorrow between ourselves does not mean that we have backtracked from our demand of a repeal of the three laws.”

The opportunity to end the impasse comes days ahead of the crucial budget session of Parliament beginning on January 29. With the Opposition gathering ammunition to attack the government on the farm laws, the Centre appears to keen to resolve the stand-off before the session.

ALSO READ: Will not participate in meetings of court-appointed committee – Farmers Unions to SC

According to sources, Union agriculture minister Narendra Singh Tomar told the farmers that the Centre was even ready to file an affidavit in the Supreme Court on putting off the laws for an extended period to dispel any doubts in their minds.

He also stressed that a consensus should be reached between the two sides before the meeting ends as it was the occasion of Guru Gobind Singh’s Parkash Parv.

“There is some positive response from the government and a new offer was on the table. The unions accepted it and a final decision will be taken by the Sanyukt Kisan Morcha,” Hannan Mollah of the All India Kisan Sabha said.

On the Centre’s demand to call off the tractor rally, farmer unions refused to do so till an agreement is arrived at on repealing the farm laws.

The Centre, according to sources, asked the farmers to approach the Supreme Court if it wanted a repeal.

NIA probe and arrests of persons supporting the protests were also discussed. Farmer leaders said that the Centre assured that people associated with the movement will not be harassed and intimidated by the agency.

To seek repeal of the laws, farmers are free to go to the SC

For anything short of repeal, a new committee comprising members from both sides can be formed to thrash out the differences, clause by clause

Issue of legal sanctity to MSP can also be discussed