Will not participate in meetings of court-appointed committee: Farmers unions to SC 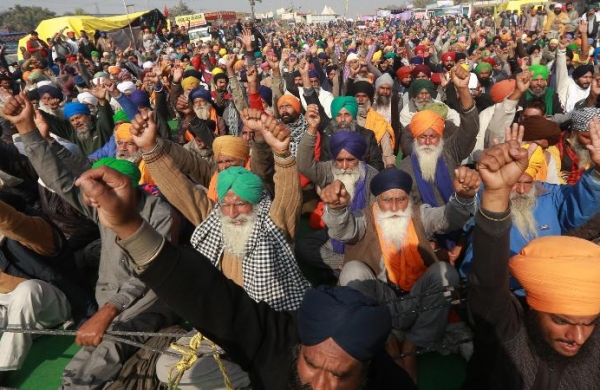 By PTI
NEW DELHI: Protesting farmer unions on Wednesday told the Supreme Court that they would not participate in meetings and deliberations to be held by the court-appointed committee to address their grievances and maintained they wanted the new farm laws repealed.

The top court told the lawyers appearing for farmers unions that all it wanted is the resolution of the impasse and peace, while the clarifying committee has not been given adjudicatory powers and it will only submit its report to it.

A bench of Chief Justice S A Bobde and Justices A S Bopanna and V Ramasubramanian was informed by senior advocate Dushyant Dave and advocate Prashant Bhushan, appearing for the farmer unions, who have been made a party in the case that they had a firm belief that farm laws are against their interest.

Bhushan said, “We have instructions from our clients to tell that they have taken a stand that they will not participate in the meetings and deliberations to be held by the committee”.

During the hearing conducted through video conferencing on a plea of ‘Kisan Mahapanchayat’ a farmer’s body from Rajasthan, the bench said, “You don’t want to appear before the committee is understandable, but casting aspersions on someone because he expressed his view is not done. You don’t need to brand anybody like this.”

It expressed strong displeasure over the aspersions cast by some farmers’ unions on members of the committee.

The bench told Bhushan to see what solution can be found and all it wants is the resolution of the impasse and peace and just saying that they will not appear before the committee, will not help and he has to counsel his clients to bring peace.

It observed, “In a democracy other than repeal, the court can set aside a law and court is seized of this. The law is not in force at the moment but suppose if we uphold the Farm laws then you can start the agitation. But the only rider is to ensure that the people of Delhi are in peace”.

Bhushan replied that he has advised his clients (protesting farmers unions) that there should be peace and said that farmers only want to celebrate Republic Day on the outer ring road of Delhi and there will be no attempt to destroy peace.

He said that farmers’ unions have stated that they don’t want any amendments in the new farm laws and they just want it to be repealed as there were no discussions in Rajya Sabha on the bills.

Bhushan added that protesting farmers are just trying to put democratic pressure on the government and they fear that if they get up and go away since laws are not in force then later if courts come to the conclusion that laws are constitutional and interim orders are withdrawn then what would happen.

“That’s why they are apprehensive”, he said.

The bench said that farmers have democratic rights to protest but the only rider is that the people of Delhi should be in peace and as a court it is only expressing its anxiety.

Attorney General K K Venugopal, appearing for Centre said that if 5,000 tractors are allowed into the city, then they will be all over the streets.

The bench said that these issues are in the “executive domain” and the authorities can meet Bhushan’s clients and record their statement that there shall be complete peace.

The bench also pulled up Dave for not appearing for the farmers’ unions on January 12, when it had stayed the implementation of the contentious new farm laws till further orders and constituted the four-member committee to make recommendations to resolve the impasse over them between the Centre and farmers’ unions protesting at Delhi borders.

“Dave you had disappeared that day when the committee was formed. You yourself had said in the previous hearing to not pass orders and we will take instruction and appear the next day. You were expected to appear before the court on that day. This is not proper and do not aggravate the situation,” the bench said.

It added that if Dave wanted to appear he could have appeared before the court and said, “This is something new that when the order is being dictated, the party is not there. Normally you are happy to appear in the matter but that day you chose not to”.

Dave said that on January 12, the matter was kept for orders and the court had not given him any time to seek directions.

“We did not appear because we were under the bonafide impression that the matter was kept for orders and not for hearing. I didn’t even get a link to the video conferencing”, he said.

The bench told Dave that normally he is happy to appear but on the day of the order he was unhappy and chose not to appear before the court.