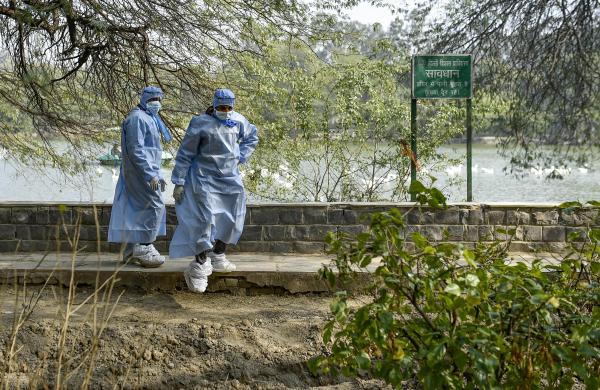 By PTI
AURANGABAD: More than 3,400 poultry birds have been culled at a village in Maharashtra’s Parbhani district after bird flu was confirmed as the cause of death of hundreds of hens there, a senior official said on Thursday.

Last week, around 900 hens died at a poultry farm in Murumba village of Parbhani.

The district administration later decided to cull birds in one-km radius of the place where the deaths took place.

“The culling of birds was undertaken on Wednesday. A total of 3,443 birds were culled till last night,” Parbhani collector Deepak Muglikar told PTI.

Samples of some dead birds from Kupta village have also been sent to a lab for testing, he said.

“There is no adverse report till now from anywhere else in the district. Residents of the Murumba village are fine and have no flu symptoms,” the official said.

Earlier, over 11,000 birds were culled in Kendrewadi and Sukni villages of Latur to stop the spread of bird flu infection, Collector B P Prithviraj said on Wednesday.

He said a report is awaited on the samples of birds found dead in Vanjarwadi village of Latur.

At least 225 birds died in Kendrewadi till Monday, while 12 hens died in Sukni and four in Wanjarwadi of Udgir taluka in Latur district.

Samples of dead birds from Kendrewadi and Sukni were sent for testing and their results came out positive for the avian infleunza infection, an official earlier said.

Over 2,000 bird deaths have been recorded in Maharashtra since January 8 when the outbreak of bird flu was noticed in the state.

Cases of the avian influenza have been reported from Mumbai, Thane, Parbhani, Latur, Beed and Dapoli (Ratnagiri).

Samples of dead birds from some other districts have also been sent to labs in Bhopal and Pune for testing, officials earlier said.

The results come three days after samples taken from crows and ducks in the national capital tested positive for avian influenza.

This had led to the Delhi government on Monday banning the sale of processed and packaged chicken brought from outside the city.

The government had also shut down the poultry market for 10 days as a precautionary measure.

“Test results of 104 samples arrived on Wednesday evening. Of these, 100 samples were collected from 35 poultry birds in the Ghazipur market. All samples have tested negative for bird flu,” senior Animal Husbandry Unit officer Rakesh Singh said.

“It means there is no spread of avian influenza in poultry birds in Delhi,” he said.

The remaining four samples of Heron birds were taken from the Hastsal Park and bird flu is suspected in these four cases, Singh said, adding that these samples have been sent from a Jalandhar-based lab to Bhopal for confirmation.

Civic authorities had on Wednesday imposed a temporary ban on sale and storage of poultry or processed chicken meat in view of the bird flu situation here.

The three municipal corporations of the city had warned establishments like restaurants and shops of strict action, including cancellation of their licence, if they fail to comply with the orders.

A drive to cull ducks was conducted on Monday at the Sanjay Lake, where several of these were found dead.