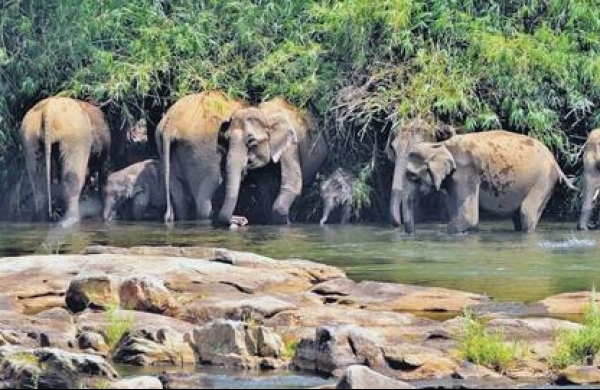 Counsel for the petitioner Abhijay Negi said, “This is the second stay that has been granted by the Honorable High Court in state government’s bid to denotify the Shivalik Elephant Reserve and proceed with the construction of the airport near the elephant corridor area.”

Interestingly, state forest minister Harak Singh Rawat was quoted saying that the Uttarakhand government was ‘not aware of the stay’ and the notification issued on the same day by the High Court was ‘purely a coincidence’.

The division bench of newly appointed Chief Justice RS Chauhan and Justice Lokpal Singh had also asked the state government, central government, Uttarakhand State Biodiversity Board and State Wildlife Board to submit their replies in the matter within four weeks of time.

However, on the very same day, the state released the notification denotifying the reserve relying on the decision of the board dated November 24, 2020 despite the stay order by the HC.

Following this, Dehradun resident Reenu Paul, who is the petitioner in the matter, had requested the court for an urgent hearing during the weekend and the matter was listed for 2.00 pm on Monday.

Advocate General who represented the state government stated that since the reserve was notified as an elephant reserve as a policy decision by a government order in 2002, it was always open to the Government to review or call back its own policy decisions.

The petitioner also highlighted that the said decision of the state government was being taken without obtaining prior approval of the central government and was in violation of the Forest Conservation Act.

On hearing all the parties, the court outlined the need for sustainable development and stayed the order dated January 8, 2021 promulgated by Anand Bardhan principal secretary, environment and forest, Uttarakhand.

The Shivalik Elephant Reserve, spread over 5,000 sq km in 14 state forest divisions was notified in 2002. The move had invited ire of local population, environmentalists and activists.

After denotfication of the reserve in November 2020, in recreation of famous ‘Chipko Movement’ dating back to 1973, thousands gathered in Thano of Dehradun opposing felling of over 10,000 trees for expansion of Dehradun airport.

After an activist from Dehradun wrote to the Prime Minister’s Office (PMO) on November 16 appealing to save the Thano forest of the Shivalik Elephant Reserve, the PMO on Saturday assigned the matter to chief wildlife warden, Uttarakhand.

The move had come after, Dr Aanchal Sharma, a dentist by profession who had approached various international organisations like United Nations Environment Programme (UNEP) through social media.

Total 85 lawyers from different parts of the country had requested the Chief Justice (CJ) of the Uttarakhand high court (HC) to intervene in the matter of Shivalik Elephant Reserve and protect it.

The lawyers in their letter requested the high court to “take suo moto cognisance of the entire situation in interest of the natural environment and conservation of wildlife and further quash the thoughtless decision of the Uttarakhand State Wildlife Board to denotify the Shivalik Elephant Reserve and restore the protection granted to the habitat and corridors of the wild Indian Elephants in the state of Uttarakhand.”

The state government had sought the NWB’s approval to transfer 243 acres of forest land to the Airports Authority of India (AAI) for expanding the airport.

The current length of runway at Jolly Grant Airport of Dehradun is 2,140 metres and it is proposed to be expanded to 2,765 meters with the construction of an additional 625 metres stretch for the runway.

Interestingly, Uttarakhand has lost about 50,000 hectares of its forests to ‘developmental activities’ in the last 20 years.