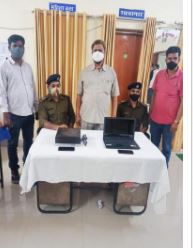 RPF has arrested the ticket broker. On 11 January, under the direction of the post in-charge Railway Protection Force Post Durg, Sub Inspector RK Pandey, KB Gupta and Principal constable MK Choubey, SK Mishra raided the Tour and Travels shop in Thane Khamaria district Bemetara. In the investigation, 26 railway e-tickets, laptop and 1 mobile were seized from the possession of ward number 4 in front of District Cooperative Bank resident Virendra Joshi (40), resident in Zee Tour Travels. Action was taken under Section 143 Railway Act by order of the in-charge by bringing the accused to the post. According to RPF, the accused had made tickets with three different personal user IDs. Lake was running an illegal business by making tickets for 26 people, 100 to 150 rupees more than the prescribed price.

79 killed, Corona infected in a week

Awareness will be done to dedicate funds for the construction of Ram temple, vehicle rally will come out in the fort