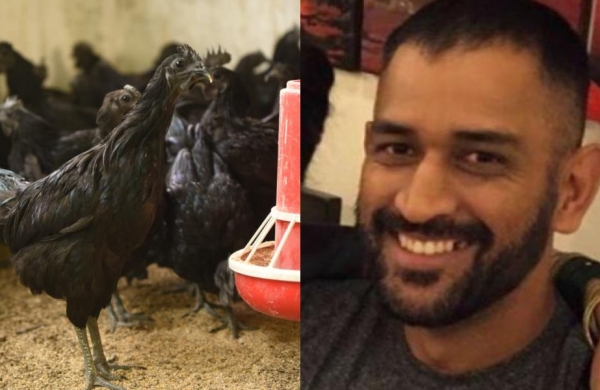 Samples from the Kadakanth chicken farm operated by local Kadaknath farmer Vinod Meda in the Jhabua district have tested positive for the killer Avian Influenza virus.

It was Meda who had reportedly got an order for the supply of 2,000 Kadaknath chicks to the farm owned by Dhoni in Ranchi. Dhoni’s farm managers had also credited advance sums into Meda’s bank account for the supply of the chicks.

It was in August 2020 that Dhoni’s farm managers had got in touch with Meda through the Krishi Vikas Kendra (KVK) and MP Kadaknath mobile phone app. Subsequently, Meda had secured the order.

Confirming the development, the state’s director (animal husbandry) Dr RK Rokde said on Tuesday that four-five days ago, samples of Kadaknath chicken from a poultry farm in the Jhabua district had been sent to the National Institute of High-Security Animal Diseases (NIHSAD-Bhopal).

“We received a letter from NIHSAD Bhopal on Tuesday informing that Kadaknath chicken samples from that poultry farm in Runipada village of Jhabua district’s Thandla block have tested positive for the Bird flu causing H5N1 virus,” Dr Rokde said.

“Subsequently, the deputy director (animal husbandry) in Jhabua district has been directed to act in the matter as per the central government’s Bird flu Action Plan 2021, which includes culling, compensation, disposal of poultry, feed material, eggs, etc. Clean-up and the disinfection-sanitization process will also be subsequently initiated at the concerned poultry farm. Further, treating the one km radius of the farm as Infected Zone, the chicks in the other poultry farms of the infected zone will also be culled,” he added.

Acting on the directives from Bhopal, an official team headed by Jhabua district deputy director (animal husbandry) Wilson Dabar and Tehsildar (Thandla) Shakti Singh Chauhan led a team to Meda’s farm in the evening at Runipada’s village. The team culled 799 Kadaknath chicken from Meda’s farm. A total of 935 Kadaknath chicken (including 135 chickens which had already died due to the killer virus before the team arrived) from the concerned were subsequently disposed of as per the standard safety protocol.

Totally devastated, the young farmer Vinod Meda had tears in his eyes. “I’m totally devastated, I had to supply the chicks to MS Dhoni’s farm in Ranchi on January 10, but a week before that my Kadaknath chickens and chicks started dying suddenly. I lost up to 2,500 chicks-chicken due to it. I reported the matter to local administration, after which samples from my farm were sent for testing in Bhopal. I got to know about the Bird flu confirmation report this evening only,” Medha said.

Also known as ‘Kali Masi’, the black chicken variety ‘Kadaknath’ is a unique chicken breed that’s black in colour, which is found in the tribal-dominated Jhabua district of MP’s Bheelanchal region. The Kadaknath chicken meat from Jhabua had also got GI tag in 2018 after a legal battle with Chhattisgarh. This chicken variety is believed to possess inherent medicinal properties with high protein and low cholesterol and fat content when compared to other chicken varieties.

According to state Director (Animal Husbandry) Dr. RK Rokde, “Following Tuesday’s development, Jhabua district has become our state’s first district, where indigenously bread chicks-chicken samples at a poultry farm have been found to be Bird flu positive. Earlier, in three districts, Indore, Neemuch, and Agar-Malwa, swab samples of chicken extracted from tables and knives of chicken-poultry shops in the market had been found Avian Influenza positive. All those shops stored chicken sourced from farms outside MP.”

Following this, nearly 500 chickens at shops in the infected zone of Indore, Agar-Malwa, and Neemuch districts were culled and disposed of.

The Bird flu outbreak has now been confirmed in 19 districts of MP following the deaths of around 1400 crows, bagula (heron) and other birds.