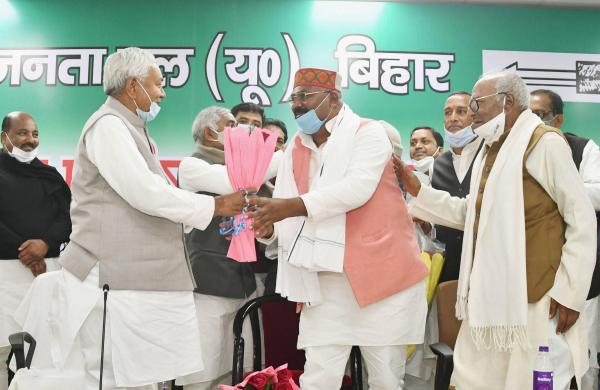 Express News Service
PATNA: Amid reports of the widening rift between BJP and JDU, Bihar chief minister in a surprise move decided to entrust the responsibility of state JDU with former MLA Umesh Kushwaha, a fresh face instead of giving the post to an experienced person.

Kushwaha was the JDU MLA from Mahnar assembly seat in 2015 who lost the election to an RJD candidate in 2020.

Kushwaha is considered closest to the national president of JDU RCP Singh and is supposed to have a strong hold on the Kushwaha community.

With the appointment of Kushwaha as state president, JDU again went back to his old-time equation of party christened as ‘Luv (Kurmi-CM belongs to this caste)-Kush (Kushwaha) equation after the poll debacle in 2020.

Munger MP LS Rajiv Ranjan Singh told the media that appointment of Umesh Kushwaha was approved by Nitish Kumar in a move to encourage more and more youth leaders to the forefront of party. He said that Kushwaha’s name was proposed by Vashishth Narayan Singh.

Rubbishing the speculation from the opposition side that JDU may exit from NDA, Singh categorically said, “Those, who fan a rumour that NDA may soon get disintegrated, must know that JDU is strongly in the NDA and their daydreaming will never come true.”

Singh admitted candidly that the number of elected MLAs of the party in 2020 had reduced but the vote bank of the party has grown up.

He said that the party has decided to work on CM Nitish Kumar’s 7-Resolves Part-II for development with justice.

A senior party leader said that with the appointment of Umesh Kushwaha as Bihar JDU chief,  Nitish Kumar made it clear that he wants to move on his time-tested political equation called ‘Lav Kush’ after recent elevation of RCP Singh to the national president of JDU. In the 2020 assembly election, Umesh Kushwaha from JDU had a direct fight with RJD’s Bina Singh on Mahnar. However, he was defeated after LJP candidate Ravindra Singh jumped into the fray at the last minute.

Kushwaha, elated at his appointment, said that he will try his best to take the political ideologies of Nitish Kumar to the people working for development with justice for all. He said that JDU will work with BJP and all allies for the betterment of the state.

Before the name of Kushwaha announced, the name of senior party leader Ram Sewak Singh was floating on priority in the race of the state president.

Meanwhile, the Leader of Opposition from RJD Tejashwi Yadav taunted that Nitish Kumar should have looked into the background of Kushwaha also before appointing him as party head in Bihar.