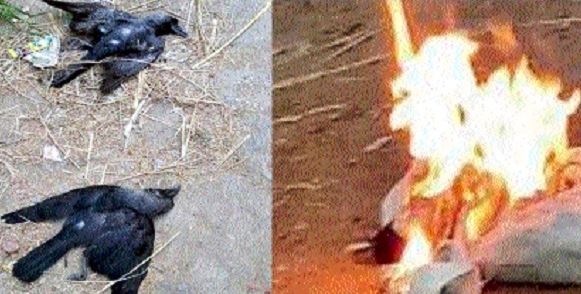 Panic gripped the Balod district after three crows all of a sudden fell dead while in flight at village Paudi. The incident has triggered suspicion that the dreaded Bird flu has reached Chhattisgarh as well. However, whether the crows died their natural death or due to Bird flu or due to any other reason, are yet to be ascertained. But the officials are not taking any chances and have initiated preventive measures. It is worth mentioning here that alert on Bird flu outbreak has already been sounded in Chhattisgarh, after confirmed cases of Bird flu were found in neighbouring Madhya Pradesh and five other states in country. Accordingly, the Chhattisgarh Animal Husbandry Department has issued extensive guidelines in this direction. The incident happened on Wednesday evening at village Paudi under Balod district, when three crows all of a sudden fell on the ground while flying and after some time they died. Out of panic, the villagers immediately burnt two crows and information was given to the District Administration. The District Administration immediately rushed a team from the Animal Husbandry Department to the village which clutched the third crow and necessary samples were collected and procedure for sending the samples to National Institute of High Security Animal Diseases (NIHSAD), Bhopal initiated through the State Level Disease Investigation Laboratory, Raipur. In the meanwhile, the Balod District Administration constituted teams for contacting people connected with poultry business (population at risk) and to make them aware about zoonotic importance and prevention of Bird flu disease. People connected with backyard poultry and commercial poultry have been asked to report immediately to the nearest veterinary centre about if they witness abnormal diseases and deaths in birds. Reacting on the developments, Balod Collector Janmejay Mahobe said to media persons that information regarding crows sudden death have been taken up by the veterinary department and have initiated necessary action. He said that the deaths could be routine or might be due to Bird flu or otherwise, which will be ascertained from test results. However, alerts have been sounded across the district and at the state-level. Veterinary Department has been alerted to monitor whether any kind of bulk deaths of birds are coming to fore or has been reported from any part of the district. Also people engaged in backyard poultry and commercial poultry business have been alerted as well. Although it is yet to be ascertained whether the crows died due to Bird flu or otherwise, considering the confirmed cases of Bird flu in neighbouring Madhya Pradesh and five other states in the country, it is being anticipated that the Bird flu has stepped into Chhattisgarh.