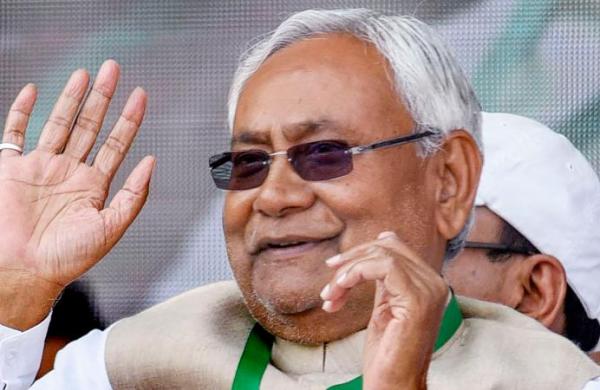 By PTI
PATNA: Bihar Chief Minister Nitish Kumar on Friday asserted that the issue of his Cabinet’s expansion did not figure during the talks he had with top BJP leaders at his official residence here the previous evening, amid reports that efforts were being made to thrash out the matter.

The JD(U) leader said his conversation with BJP national general secretary in-charge of the state Bhupendra Yadav, state unit chief Sanjay Jaiswal and deputy CMs Tarkishor Prasad and Renu Devi was “sahaj aur samanya” (normal and cordial), but it did not centre around political issues.

“As of now, we have a 14-member-strong state cabinet. The issue (of expansion) was not taken up for discussion at yesterday’s meeting,” Kumar told reporters emerging from the secretariat where he had reviewed, among other things, implementation of prohibition in the state which went dry close to five years ago.

BJP leaders had met Kumar at 1, Anney Marg shortly after calling on the newly elected national president of the JD(U), RCP Singh, at the party’s Birchand Patel Marg office.

Speculation is rife that leaders were trying to arrive at a decision on the issue of cabinet expansion, which has been hanging fire on account of contesting claims, reportedly, by the BJP and the JD(U), with regard to the parties’ respective representation in the council of ministers.

The BJP is said to be insistent on having a bigger share of the pie since it has emerged as the larger NDA constituent in the recently held assembly elections, winning 74 seats as against the JD(U)’s tally of 43.

The chief minister’s party, however, is said to be keen on a 50-50 formula for the JD(U)-BJP, the contention being that its tally fell not because of a dip in its leader’s popularity but due to the rebellion of Chirag Paswan’s LJP which caught the NDA unawares.

As per rules, the state cabinet can have up to 36 members.

The 13 cabinet members, other than the CM, include seven from the BJP, four from the JD(U) and one each from smaller allies — the HAM and the VIP.

Replying to a query on Sushil Kumar Modi, his former deputy who was recently elected to the Rajya Sabha, Kumar said, “We share a very close relationship. Our rapport has been excellent. But it is for the BJP to take a call on what responsibility to assign to which of its leaders.”

Earlier in the day, chairing the meetings attended by ministers and top officials, the chief minister issued instructions for speeding up irrigation with focus on methods like sprinkle or drip which do not involve heavy consumption of water.

He also called for a comprehensive survey of farm holdings so that pieces of land which are not sufficiently irrigated could be identified for remedial action.

He also ordered a firm crackdown on “big fish” involved in illicit liquor trade, which, in turn, would break the “distribution and supply chain”.

He said there should be tight patrolling of roads and highways, which are usually preferred by liquor smugglers, with a special focus on areas bordering adjoining states and Nepal.

Also, keep a close watch on those who were previously known to be involved in liquor trade but now appear to have taken up other business, he said.