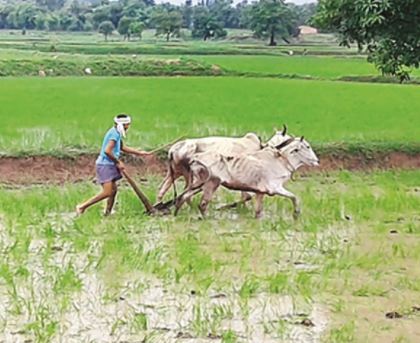 Some farmers of Gram Panchayat Lai of Manendragarh development block of Koriya district thought of doing mass farming this year before monsoon. Everyone planted a tomato crop with great enthusiasm. The plants grew, before the weather hit and the entire crop was destroyed. In the unsuccessful attempt of this collective farming, the deposits of these farmers were completely wasted. Due to all the ruin in one stroke, these farmers faced a huge economic problem. Now they had neither the option of further farming nor any saving capital, with the help of which they could try again.

However, the farmers did not give up and in such a situation the MNREGA scheme became the support of these farmers. Under this scheme, he was sanctioned the collective fruit plantation intercourse lemongrass, sweet potato cultivation work, which helped him get rid of his debts. At the same time, now they have started getting benefits from this agriculture. In this work, they have benefited about two lakh rupees in the first six months only from the established maternal nursery of fruit plants. These farmers have supported their economic progress and plan to buy a tractor soon.

This story of bringing change through collective efforts started with the mutual conversation of five simple farmers of the village and the urge to move forward. Among these farmers, Parasram Bhaina, Sonasay Pando, Haridas Vaishnav, Santosh Kumar Yadav and Mohammad Sattar negotiated among themselves to form a large-scale farming action plan. However, after the loss of tomato crop, these farmers decided to start a new livelihood, in which they were assisted by the Gram Panchayat and the Krishi Vigyan Kendra of the district.