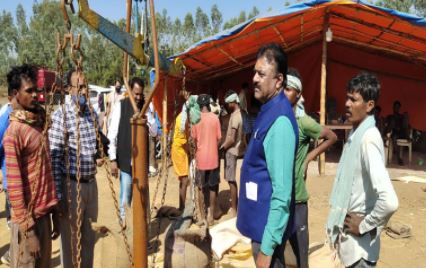 MLA and Parliamentary Secretary Rekhachand Jain on Tuesday conducted a surprise inspection of the paddy procurement centers under Nagarnar block. MLA Jain reached Nagar Nagar, Bahamani, Birsaguda, Babu Semra paddy procurement centers. He discussed with the farmers present. Asked about any kind of problem in paddy procurement centers. The farmers responded satisfactorily. The farmers expressed their gratitude to the Bhupesh government of Congress and its MLA. After that, after discussing with the paddy procurement center in-charge, he directed to follow the guidelines and guidelines of the state government. The farmers were asked to take special care that there is no problem. He said that the farmer is the provider of this country. It is the duty and responsibility of all of us to take care of his problems. As per the intention of Bhupesh Government, the arrangement of all paddy procurement centers has been streamlined and fixed. Guidelines and guidelines of the government are being specially followed. This is the gift of the Bhupesh government of the Congress, which is benefiting every poor farmer and laborer of the state. Nagarnar Block Congress Committee President Virendra Sahni, District Member Dhanurjay Das, Sarpanch Rajendra Baghel, Purshoram, Anant Ram, Harihar, Lakshminarayan Sethia, Lakshmi Bhardwaj, Santosh Sethia, Emanuil, Devi Sing, Jyetram Ram Nag Kamalochan, Mangru Nag, during inspection Congress officials and workers including Rameshwar Bisai, Suryanarayana Rao, Sarita Kashyap, Rajesh Kashyap were present.