2021 Budget does not matter, only concerned about having farm laws repealed: Protesting farmers 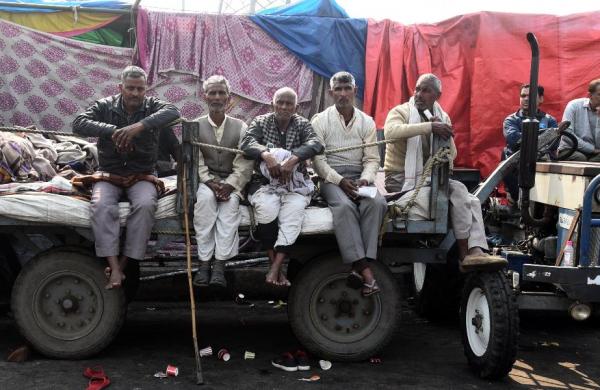 By PTI
NEW DELHI: Farmers protesting at various sites on the border of Delhi on Monday unequivocally said they are only concerned about their common goal of having the three farm laws repealed, and what has been offered to the agriculture sector in the Union budget did not matter.

At Singhu Border, most farmers were rather clueless about the Budget, saying they were “unable to access the internet” at the protest site, so couldn’t get to know the details. “Our demand was to increase the price of crops, not agriculture credit. This is a conspiracy to take away your land. Within 10-15 years, the corporate will take your land. The fight is for rate of crops, not for credit. They didn’t talk about MSP. There is nothing for farmers,” farmer leader Rakesh Tikait told PTI.

“The administration has put barbed wires on three roads. They are stopping movement of vehicles towards Delhi, not us. We have been waiting to talk to the prime minister for the past seven years. PM Modi, give us your mobile number. We are ready to talk,” he added.

Randhir Singh (48), from Kaithal district of Haryana, who has been camping there since December, said, “Our only goal right now is to see the three laws repealed. Union budget is not of immediate concern to us.”

Pala Ram, also from the same village as Singh, echoed similar views. “Some people told me about the points made for the agriculture sector, but that is something, we are not worried about at the moment,” he said.

Avtar Singh (65), from Punjab’s Patiala, said that the government should have offered ways to increase farmers’ income and not just credit target.

ALSO READ| Farmers will not benefit from Union Budget 2021: Congress

Ranjeet Raju, state president, Gramin Kisan Majdoor Samiti, Sri Ganga Nagar said, “If the government wants to help, they should take steps to increase farmers’ income, not by increasing agriculture credit target. This is like pushing farmers into the debt trap, which eventually leads to more farmer suicides. And micro-irrigation corpus, which I am told is doubled in this Budget, is something that goes to industries in the name of farmers.”

“Farmers didn’t expect much from the present Budget. But were curious to know the funds marked for the agriculture sector.  were bereft of those details too this time,” said Jehangir (31), a farmer hailing from Bihar.