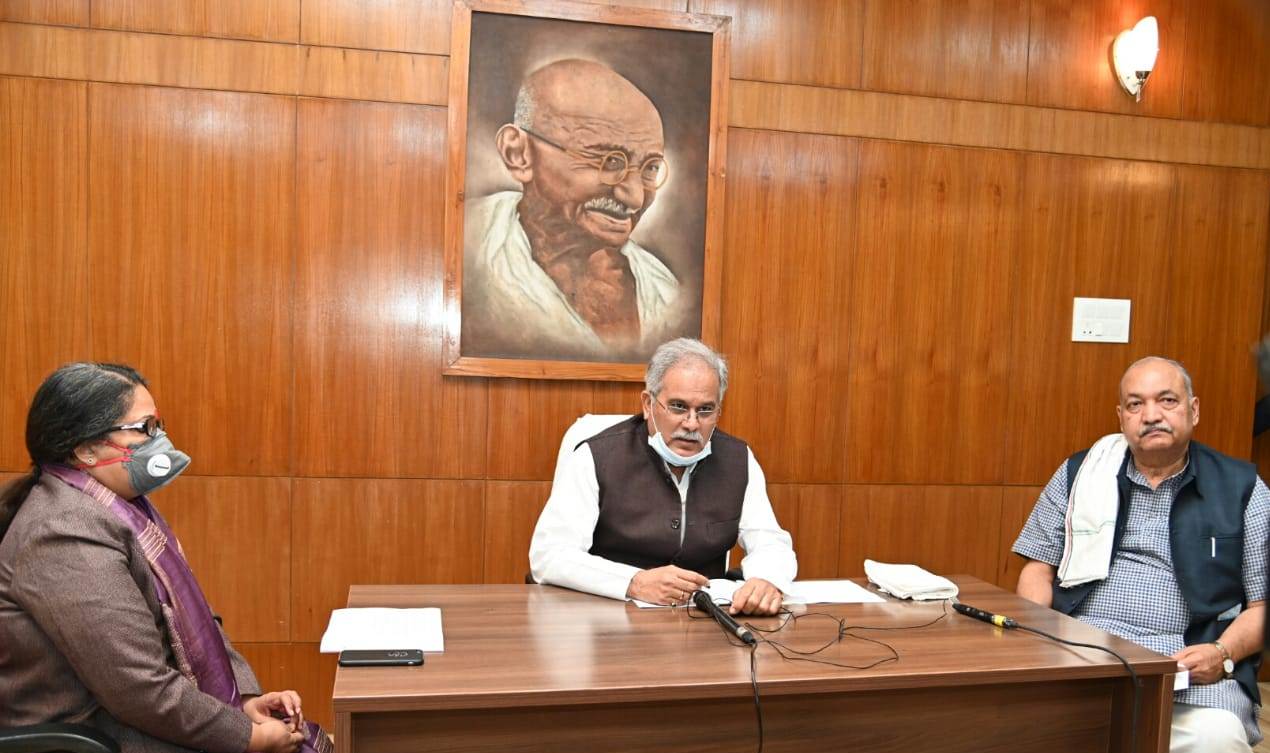 Chief Minister Shri Bhupesh Baghel today transferred Rs. 5 crore 12 lakh as the 10th installment of cow dung in the account of the beneficiaries of the state government’s Godhan Nyaya Yojana to the account of the cowherds. Under this scheme more than 1 lakh 40 thousand cattle rearers of the state are getting benefited.
Addressing the event organized through video conferencing from his office located in the Vidhan Sabha premises, Chief Minister Mr. Baghel said that under the Godan Nyaya Yojana, an amount of Rs 64 crore 20 lakh has been given to the cowherds so far. This is changing their economic situation. New employment opportunities are being created and farmers are moving towards organic farming. Thousands of rural women are working on vermicompost production along with cow dung in Godan Nyaya Yojana. The selling rate of vermi compost has been increased from Rs 8 per kg to Rs 10 per kg. New employment opportunities are being created through this scheme. Farmers who are using vermi compost are moving towards organic farming. Mr. Baghel said that the price of cereals and fruits produced in organic farming increases by one and a half times. This will also significantly increase the income of farmers. He congratulated and congratulated all the beneficiaries associated with the Godhan scheme. Agriculture and Water Resources Minister Shri Ravindra Choubey and Agriculture Production Commissioner Dr. M. Geeta were present on the occasion.
Agriculture Production Commissioner Dr. Geeta informed that 7 thousand 824 Gothan have been approved in the state. Out of which 4 thousand 704 gothan have been completed. Of these, 4 thousand 173 Gothans are active. So far, 32 lakh 10 thousand quintal dung has been purchased under the Godhan Nyaya Yojana. 8 thousand 50 quintal vermi compost prepared from cow dung in Gothan has been sold so far. Farmers have donated a para worth about Rs 5 crore in Gothanas. Azola is being produced as cattle feed in Gothanas. Which is constantly increasing. He informed that 78 thousand 47 vermi stitches were approved for the manufacture of vermi compost in Gothan, out of which 54 thousand 241 vermi stitches have been completed and construction of 16 thousand 810 vermi stitches is in progress. Dr. Geeta informed that vermi compost samples are being tested in two laboratories of Raipur, one each in Durg, Bilaspur, Surguja, Bastar and Raigarh. So far 1,006 samples have been analyzed. He also informed that among the beneficiaries of Godan Nyaya Yojana, 47.5 percent beneficiaries belong to Other Backward Classes, 44 percent beneficiaries are women and 41 percent beneficiaries belong to Scheduled Tribes and 7.80 percent beneficiaries belong to Scheduled Castes.