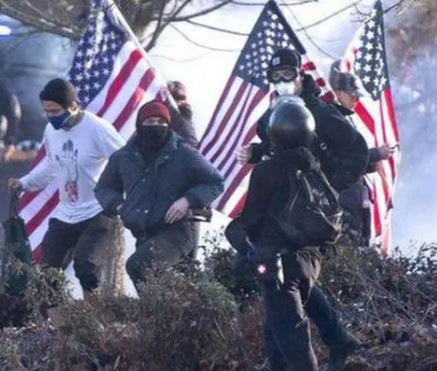 Hundreds of Donald Trump supporters coalesced on the streets across the United States on December 11 to protest against Democrat Joe Biden’s electoral victory. Violence broke out in Washington DC where far right groups clashed with counter protesters despite heavy police presence. In the aftermath, the cops tried to control the brawl between Antifa and Proud boys with tear gases and pepper sprays, The Guardian reported.

The organizers of the protests ‘Stop The Steal’ urged protestors to join ‘Jericho marches’ and prayer rallies calling out authorities to overturn the election results. However, nearly 200 members of a violent Right Wing group ‘Proud Boys’ got into a scuffle with counter protesters Antifa group, which rallied against fascism.

Cops jumped in forcing pepper sprays on those involved in the violence. As per Guardian, members of the ‘Proud Boys’ group, who were wearing combat fatigues and ballistic vests flashed hand signals used by white nationalists. The two groups also shouted verbal abuses at each other, but police dispersed the crowd.

According to the Metropolitan Police, cops sprayed at least two counter protesters and arrested six people involved. Apart from Washington, the protests were organized in Georgia, Pennsylvania, Michigan, Wisconsin, Nevada and Arizona, where Trump’s campaign has filed multiple lawsuits claiming ‘voter fraud’. However, the Trump campaign had to suffer not one, but many jolts as judges in various states, Texas being the latest, rejected the claim and hailed Joe Biden as President-elect.