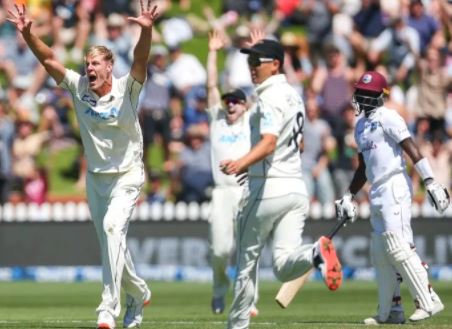 It looked like Kyle Jamieson could do no wrong on Saturday. He’d started it well, making sure he had a present waiting for his girlfriend for her birthday and ended it with his second five-wicket haul in Test cricket.

“I actually sorted it out myself this morning,” the 25-year old said after the day’s play. “I was very wise and went down and saw the concierge and hopefully she’s not listening to this before she’s walked back into the room and seen hopefully a nice bouquet of flowers sitting there.”

Not unlike how he needed the hotel staff’s help to surprise his partner, Jamieson needed his team-mates’ help to reduce West Indies to 124 for 8. The rookie will pick up the headlines for figures of 13-4-34-5 but his perspectives are quite clear.

“It’s called, I guess, a four-pronged attack,” Jamieson said. “And I guess, myself very much being the fourth prong of that. You look at Tim [Southee] and Trent [Boult] and Wags [Neil Wagner] and the way they’ve gone about their business in the last eight-ten years and it’s nothing short of world-class.