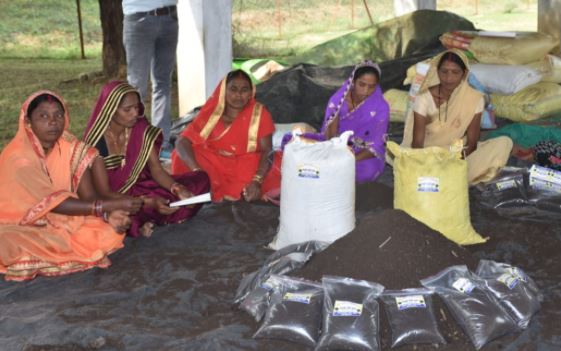 The Chhattisgarh government has increased the minimum selling rate of vermi compost produced in Gothan from Rs 8 per kg to a minimum of Rs 10 per kg. On the instructions of Chief Minister Mr. Bhupesh Baghel, an order to this effect has been issued by the Commissioner of Agricultural Production.

It is known that this year, the state’s first-of-its-kind cow dung procurement scheme has been launched from the Hareli festival, the Godhan Nyaya Yojana, under which cow dung is being purchased from the villagers, farmers and livestock at Rs 2 per kg. So far, Rs. 59.08 crore has been paid by the Chief Minister to the online accounts of 1.36 lakh dung vendors in the Godhan Nyaya Yojana as the value of cow dung purchased from them.

Under the Suraji Village Scheme of the Government of Chhattisgarh, out of 6430 Gothans approved in the state, the work of cow dung is being done in 4487 Gothanas. So far, 44 thousand stitches have been manufactured and 16 thousand stitches are being made in Gauthano to make vermi compost from the dung purchased. So far, 8000 quintal vermi compost has been produced in the state and 1000 quintal vermi compost has been sold. Thousands of women self-help groups of the state are working to make vermicompost from cow dung in Gothan, their income will increase by increasing the minimum sale rate of vermi compost. Under this scheme, the state government also plans to set up a laboratory to check the quality of vermi compost in every district of the state.