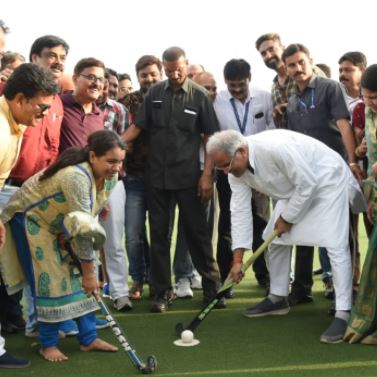 The slogan of Chief Minister Mr. Bhupesh Baghel’s Khelbo-Jeetbo-Garhbo Nava Chhattisgarh is now becoming increasingly concrete on the ground. State-of-the-art sports facilities are being developed rapidly for the players and sports enthusiasts in the state of Chhattisgarh. This will give a different identity to the state of Chhattisgarh on the sports map, as well as the players here will get the facility of international level sports training in the state itself. Under the leadership of Chief Minister Shri Bhupesh Baghel, the State Government has also achieved a major achievement in the development of sports infrastructure in the last two years. Under the leadership of the Chief Minister and under the guidance of Sports Minister Shri Umesh Patel, several important steps have been taken to promote modern sports as well as rural and traditional sports in the state and to enhance the talent of the players.
After the formation of the new government in the state, the Sports Development Authority has been formed in the state, taking an important decision to increase sports and sports facilities. To promote sports activities in the state, new and modern sports academies are being started. These academies will be run through the Chhattisgarh Sports Development Authority. Since the formation of the state of Chhattisgarh, till now there were many sports fields and sports infrastructure which were not being used properly, the Bhupesh government, through the Sports Development Authority, upgraded these unusable playgrounds and made them useful for the players. Has been
Most recently on November 19, Chief Minister Mr. Baghel laid the foundation stone for the construction of Tennis Sport Academy on 4 acres of land adjoining the Agricultural University Cultural Building in Raipur. 17 crore 75 lakh has been sanctioned by the Sports and Youth Welfare Department of the state government for the construction of this academy. Under the Tennis Sport Academy, Admin Building, Hostel Building and Tennis Court will be constructed. The tennis court will have a capacity of 3, 500 spectators.