Xiaomi launched such a power bank, will be able to bake in the cold 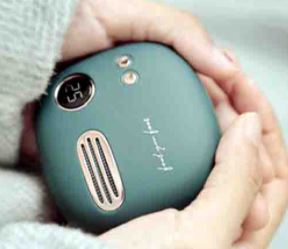 Xiaomi is now not just a mobile manufacturer, but even if it is also called a lifestyle brand, it will not be wrong. Xiaomi has introduced in the market from shoes to bags and T-shirts and now the company has launched a power bank that you can also heat your hands in winter. This new power bank of Xiaomi has been named ZMI Hand Warmer Power Bank. It is known from the name that this Powerbank will also be useful for bake hands.

Talking about the features, this power bank has a 5000mAh battery, on which the company has claimed that it will charge the iPhone 12 faster than Apple’s 5 watt charger. This power bank has been equipped with PTC type temperature heating technology which heats the outer part of the power bank to 52 degree Celsius to bake hands. Through this you can bake for about two hours.

The company has claimed that this power bank can full charge the iPhone 12 in 54 minutes. Apart from this, you will also be able to charge Bluetooth headphone, smart band and smartwatch with this powerbank. It also has an LED flashlight. Currently, there is no information about when it will be made available in India.