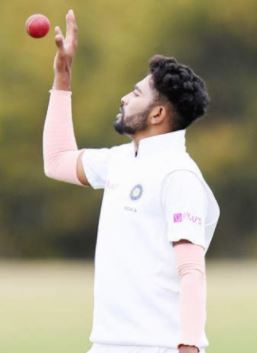 The BCCI (Board of Control for Cricket in India) on Saturday issued an official statement after Indian cricket team fast bowler Mohammed Siraj’s father, Mohammed Ghouse, passed away on Friday at the age of 53. The BCCI informed that Siraj was offered the option of flying back for his father’s last rites, but the fast bowler opted to stay back.

“Team India fast bowler Mohammed Siraj lost his father on Friday after a brief illness. The Board of Control for Cricket in India (BCCI) had a discussion with Siraj and he was offered the option of flying back and be with his family in this hour of grief,” the BCCI said.

“The fast bowler has decided to stay with the Indian contingent and continue performing his national duties. The BCCI shares his grief and will be supportive of Siraj in this extremely challenging phase. “The BCCI requests the media to accord Siraj and his bereaved family members their space and privacy.”

BCCI chief Sourav Ganguly lauded Siraj’s strength and called him a ‘tremendous character’ for opting to stay back and prioritise national duty. “May Mohammed Siraj have a lot of strength to overcome this loss… lots of good wishes for his success in this trip… tremendous character,” Ganguly tweeted.

Siraj was drafted into India’s Test side on the back of his campaign in IPL 2020, which saw the fast bowler, playing for Royal Challengers Bangalore, take 11 wickets from nine matches. Against Kolkata Knight Riders, Siraj created history by becoming the first bowler ever in the IPL to bowl two maidens in the same match, finishing with 3/8 from four overs.