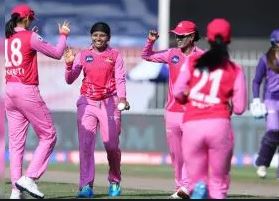 After winning the Women’s T20 Challenge finals by 16 runs against the Supernovas, Trailblazers skipper Smriti Mandhana said that Salma Khatun’s four overs was the match-winning spell for her team.

Supernovas failed to chase down a target of 119 runs as the side was restricted to 102/7 in the allotted twenty overs, handing a win to Trailblazers by 16 runs. For Supernovas, Harmanpreet Kaur top-scored with a knock of 30 runs while for Trailblazers, Salma Khatun took three wickets while Deepti Sharma scalped two wickets.

This is the first time that Trailblazers won the Women’s T20 Challenge. The other two titles were won by Supernovas in 2018 and 2019 Earlier, Trailblazers had posted a total of 118/8 in the allotted twenty overs, owing to a knock of 68 runs by Smriti Mandhana.

For Supernovas, Radha Yadav had taken five wickets and as a result, she became the first player to take a five-wicket haul in Women’s T20 Challenge.