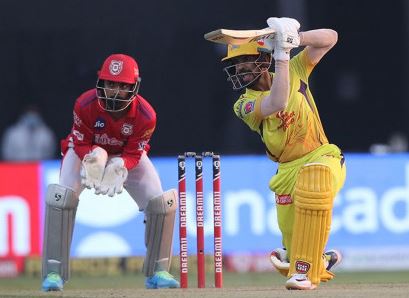 Chennai Super Kings easily defeated Kings XI Punjab in the 53rd match of IPL 2020. With this defeat, Chennai also crushed Punjab’s dreams of reaching the playoffs. Kings XI Punjab had to win the match in every appearance to reach the playoffs. In this match played in Abu Dhabi, Kings XI Punjab scored 153 for 6 wickets in 20 overs, but Chennai easily achieved this goal.

Rahul then welcomed Shardul Thakur with two fours in the fifth over, but Ngidi gave Mayank the bold Chennai first success in the next over. Mayank made 25 runs with the help of five fours in 15 balls and also shared 48 runs for the first wicket. Punjab’s score was 53 for one wicket in the power play, but after this the bowlers controlled the run flow and Punjab meanwhile lost the wickets of Rahul, Nicholas Puran and Chris Gayle. Engidi bowled Rahul in the ninth over to end his 29-run knock off 27 balls, while Shardul caught Puran (two runs off six balls) in the 11th over at the hands of wicketkeeper Mahendra Singh Dhoni.

Chris Gayle (12 runs off 19 balls), running in great rhythm, also failed to play a big innings. He also lost the review after being lambasted by veteran Imran Tahir. At this time the team’s score was 72 runs for four wickets in 11.5 overs. Mandeep Singh hit Deepak Chahar’s first ball in the 14th over, which was the team’s first boundary after seven overs. Hooda then hit a brilliant six over the covers in the 16th over against Imran Tahir, but Jadeja bowled Mandeep (14) in the very next over to break the 36-run partnership for the fifth wicket.

Jimmy Neesham (two) could not walk but Hooda was not impressed. He hit two sixes in this over of Engidi. He completed his half-century in 26 balls with a single off the third ball of the 19th over. Hooda also hit a six in the last over of Ngidi. He also had an unbroken 40-run partnership for the seventh wicket with Jordan, with Jordan contributing just four runs.