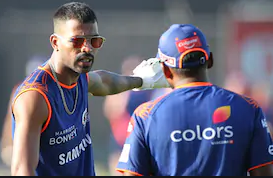 Indian cricketer Hardik Pandya is renowned for his flamboyancy on and off the field. The lanky-all-rounder, who made his debut for India in 2016, has gone on to become a valuable part of the team. Pandya is currently in the UAE where he is plying his trade in the Dream11 IPL 2020 for the Mumbai-based franchise.

Pandya is extremely active on social media where he keeps his fans updated about his whereabouts. The Baroda-based cricketer goes about his business without paying heed to outside noise.

Pandya was at it once again as he took to Instagram and uploaded a photo of himself where he has donned a completely new look. In the photo, the Mumbai all-rounder is seen wearing a black T-shirt along with fashionable sunglasses. He also flaunts his lavish watch in the photo.