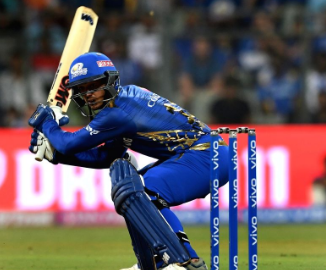 Mumbai Indians’ head coach Mahela Jayawardene asked de Kock to never do it again as the marketing guys of the team went nuts.

Mumbai Indians chased down the total of 149 with eight wickets in hand and 19 balls to spare against KKR on Friday at the Sheikh Zayed Stadium in Abu Dhabi. Quinton de Kock top-scored for the Rohit Sharma-led side as he played an unbeaten knock of 78 runs.
“Apart from Quinny batting with his practice pants, everything else was pretty decent. Don’t do that again because the marketing guys are going nuts, people went nuts as well. If it worked, it worked but we’ll sort something else,” Jayawardene said in a video posted on the official Twitter handle of Mumbai Indians.

With this win, Rohit Sharma-led Mumbai Indians went to the top of the IPL standings with 12 points from eight matches.

Batting first, KKR posted a total of 148/5 in the allotted twenty overs as Pat Cummins and Eoin Morgan played knocks of 53 and 39 respectively.At one stage, KKR found itself at 61/5, but from there on, Cummins and Morgan retrieved the innings for the side by stitching together an unbeaten stand of 87 runs. For Mumbai Indians, Rahul Chahar returned with the best bowling figures (2-18).