After the formation of the state, Chhattisgarh got major achievements in the development of sports for the first time 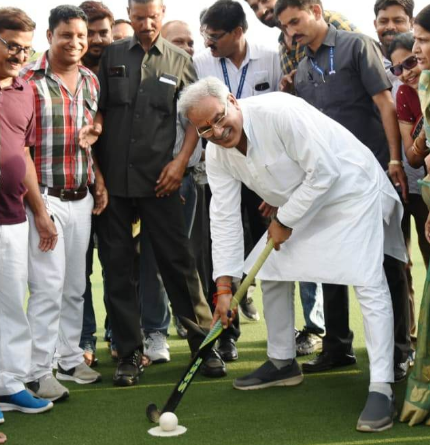 The dream of the players of Chhattisgarh state will now come true. Chief Minister Mr. Bhupesh Baghel has added a new chapter in the development of sports in the state by taking the concept of Garhbo Nava Chhattisgarh into the playgrounds. ‘Residential Hockey Academy’ is going to be started in Raipur for the first time after the formation of Chhattisgarh state. Simultaneously, ‘Excellence Center’ is going to start in Bahtarai Bilaspur. The proposal of ‘Excellence Center’ for Residential Hockey Academy (Boy & Girls) in Raipur and Athletic, Wrestling and Swimming in Bilaspur was sent to Sports Authority of India by the Department of Sports and Youth Welfare, whose approval was received. has occurred.

Efforts are now being made to embark on the realization of ‘Garhbo Nava Chhattisgarh’ in the field of sports in order to improve the sports talent of the youth of the state and to provide them appropriate training. Earlier, a proposal was sent to the Sports Authority of India for archery by the Department of Sports and Youth Welfare, whose approval has also been received. At present, archery training is being given to the players in Raipur. Action is under process to develop archery game in Raipur under ‘One State One Game’.
On the recognition of Residential Hockey Academy in Raipur and ‘Excellence Center’ for Athletic, Wrestling and Swimming in Bilaspur, Chief Minister Bhupesh Baghel and Sports Minister Mr. Umesh Patel gave youth players, sports coaches and officials of State Sports and Youth Welfare Department- Congratulations and best wishes to the employees.
The Chief Minister Mr. Bhupesh Baghel has constituted the Chhattisgarh Sports Development Authority for the maintenance of available sports infrastructure and the running of residential sports academies in the state of Chhattisgarh. Games are being developed across the state through the authority. The selection program for the Residential Hockey Academy to be started in Raipur is being prepared by the Department of Sports and Youth Welfare. All the facilities related to hostel, school, kit, food and residential academy will be made available to the trainees selected for residential academy.