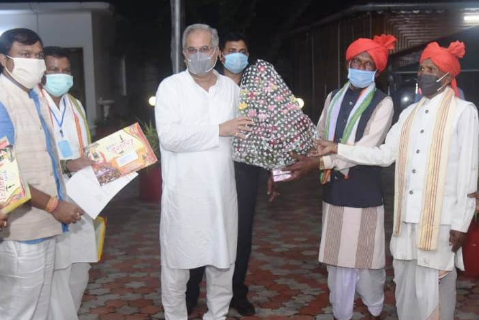 The delegation of Bastar Dussehra Committee led by Industry Minister Shri Kavasi Lakhma and Lok Sabha Constituency MP Mr. Deepak Badge met courtesy of Chief Minister Mr. Bhupesh Baghel at his residence office here today. The Chief Minister was presented a wreath by the Vice-Chairman of the committee during this period and duly invited him to participate in the Bastar Dussehra 2020 program. The delegation from Bastar told the Chief Minister Mr. Baghel that this year the 105 day festival will start from Hareli Amavasya and will be celebrated till the 13th day of Ashwin Shukla Paksha, Under which there will be many traditional Puja Vidhan programs. This year the Bel Navata program will be completed on 22 October and the Rath Parikrama Puja Vidhan on 26 October. Bastar Dussehra of Chhattisgarh is unique in addition to Mysore (Karnataka) and Kinnaur (Himachal Pradesh). Chief Minister Bhupesh Baghel while thanking the delegation for being invited to Bastar Dussehra, said that the world famous Bastar Dussehra is a symbol of Chhattisgarh’s rich cultural heritage and social harmony. Shri Balaram Manjhi, Shri Premlal Manjhi, Shri Padmaram Chalki, Shri Satish Mishra and Shri Bharatik Maurya were present on the occasion.