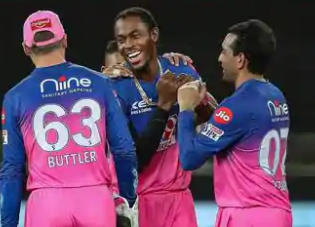 The 23rd match of the 13th season of the Indian Premier League was played between Rajasthan Royals and Delhi Capitals at the ground in Sharjah. In this match, Delhi team defeated Rajasthan badly. Delhi Capitals, captained by Shreyas Iyer, won their fifth match in IPL 2020 by 46 runs and regained the number one position in the table. In this match, Rajasthan team captain Steve Smith decided to bowl after winning the toss. In such a situation, the Delhi team, batting first, scored 184 runs, losing 8 wickets in 20 overs.

In this way, there was a target of 185 runs for victory in front of Rajasthan, but Rajasthan team collapsed by scoring 138 runs in 19.4 overs and lost the match by 46 runs. This is Rajasthan’s fourth defeat in IPL 2020. Rajasthan’s start was not very good and Delhi spinner R Ashwin got them caught at the hands of Dhawan on the score of 13 runs. Captain Steve Smith scored 24 off 17 balls and was dismissed by Enrique Norkhia.

Hetmyer caught Smith’s catch. Sanju Samson’s poor form continues continuously and he surrendered by scoring only 5 runs. On the ball of Stoinis he caught his catch to Hetmyer. Mahipal Lomore became a victim of Ashwin by scoring a run and his catch Akshar Patel caught Akshar Patel on the short cover. Yashaswi Jaiswal played a good innings of 34 runs, but he was bowled clean by Stoynis. Andrew Tye scored 6 runs and caught Rabada off Akshar Patel. Jofra Archer scored 2 runs and was dismissed by Rabada. Shreyas Gopal returned to the pavilion after scoring 2 runs. Rahul Tewatia became the victim of Rabada after scoring 38 runs. Varun Aaron could score a run. After losing the toss and batting first, the Delhi Capitals team got the first blow in the second over when opener Shikhar Dhawan became the victim of Joffra Archer by scoring 5 runs.