New problem:Now a disease like corona spreads in cows of Chhattisgarh, cattle are being kept in quarantine 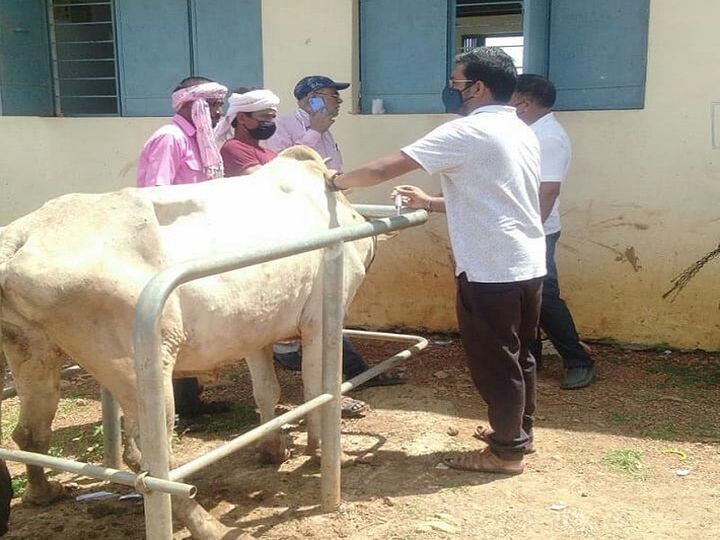 Now, a corona-like infection has also emerged in cattle. The name of this disease is long skin. It is also commonly known as Katil Chicken Pox or Chhoti Mata. It is spreading from one cattle to another. There is no exact cure for this. Therefore, this disease is being compared to corona. Now cattlemen are getting worried for quarantining cattle and also for social distancing in them. The disease is spreading in districts like Raipur, Bilaspur, Rajnandgaon, Mungeli, Narayanpur, Surguja, Bemetra, Kabirdham, Jashpur, Bastar, Korba, Balrampur, Kanker in the state. In Kabirdham and Bemetra district alone, three thousand cattle are suffering from this disease.

Dr. NP Mishra, Deputy Director of Veterinary Department of Kabirdham district, said that information is being sought in relation to this disease. Cattle are infected with this disease in 244 villages in the district. So far, 2432 cases have been reported. They have treated 1798. Remaining cattle continue to be treated there. Animals are appealing to the farmers that the cattle that have this disease, keep them separate from other cattle. So that the infection does not spread to other cattle. This disease is occurring in cows and bulls.

Deputy Director Dr. NP Mishra said that any part of the animal’s body suddenly swells. It starts with the front foot of the body. During this time, animals may also have high fever and cold. In addition, round and round lesions also appear in the animal’s body. Water keeps coming out from these wounds. The wound does not dry quickly. In this infectious disease, animals suffer. But it is a matter of relief that not a single animal has died due to this disease so far.

The disease is more
vulnerable to cows. Most of the animals of cows are coming in the grip of this disease. Cattle and goats of buffalo dynasty are left over from it. The animal department is fully mobilized due to increasing infection. In villages where more cases are being reported, animals are being treated by setting up camps. Dr. Vijay Kurre of Bemetra district’s veterinary hospital, Nawagarh, said that information about the outbreak of long skin disease disease is being received in various villages of the block. In the past, camps have been organized in village Bagul, Ghoghara, Dhobnikala and Bortara. In the coming days, by organizing camps in other villages, infected animals will be identified and treated.

There is no
danger of vaccine to prevent the disease, there is no danger that no vaccine has been made to prevent this disease like Corona. Other drugs including antibiotic injections are being used as a treatment. In this situation, disease can be prevented from spreading to healthy animals by taking proper care of infected animals. Therefore, cattle rearers need to take extra precautions. In order to prevent the spread of infectious disease called long skin disease.