NASA’s MRO has been watching Mars for 15 years, every color of red planet seen in spectacular pictures 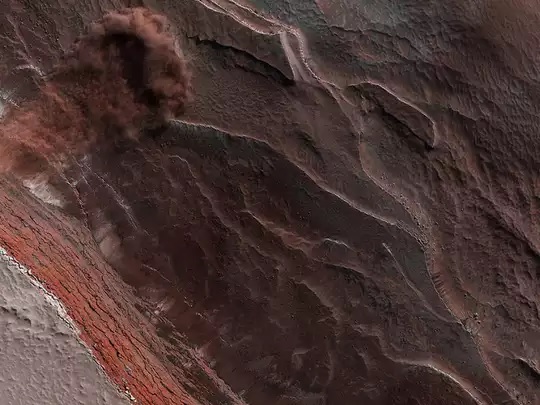 America’s space agency NASA’s Mars Reconnaissance Orbiter (MRO) has sent amazing pictures of Mars in 15 years. Jet Propulsion Laboratory of South California manages it. The Mars Color Imager (MARCI), Context Camera (CTX) and High-Resolution Imaging Science Experiment (HiRISE) in this MRO capture all the pictures of the red planet far and near. They also collect surface details on zooming of the entire planet at once. With their help, storms, dust storms and changing surface can be seen. Since March 2006 HiRISE alone has taken nearly 7 lakh photos. NASA recently shared some great photos

HiRISE took this picture from 185 miles (about 297) kilometers above the surface of Mars. A huge dust storm is visible in it. Based on its shade, it has been found that its height will be more than half a mile, up to about 800 meters. It was the tallest building on earth as the Burj Khalifa of the United Arab Emirates.

The atmosphere of Mars is less dense. Therefore debris or meteorites falling from space reach the surface directly. CTX has seen 800 such craters so far. This photo is also taken by HiRISE. The diameter of this crater is 100 ft (30 m) and a large area around it has formed a blast zone. The matter has grown up to 9.3 mi (15 km).