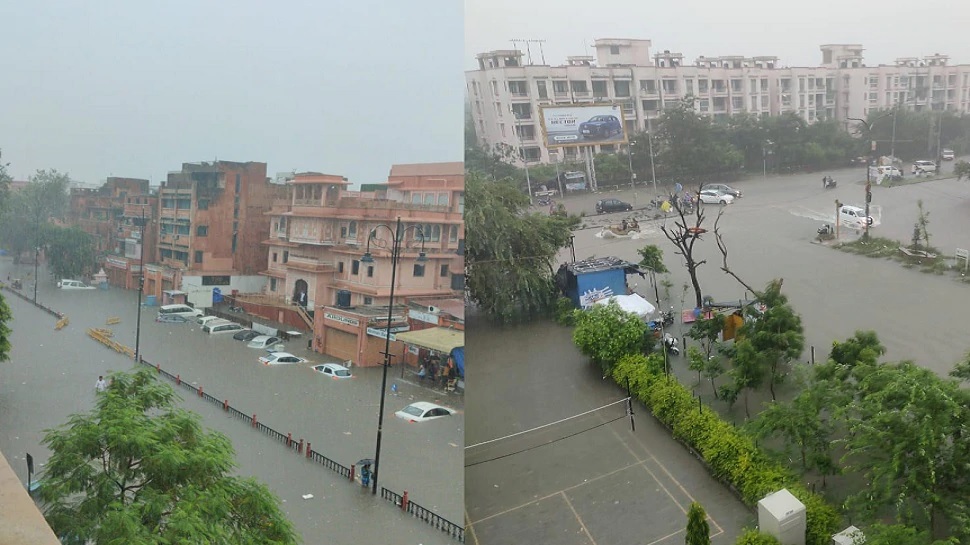 Jaipur: After the first monsoon rains in the state, the situation in the capital Jaipur has started deteriorating. Water is flooded everywhere in Jaipur. The lower areas have drowned. Vehicles have stopped due to water filling the roads. After the morning rains in Jaipur, more than 4 inches of rain has been recorded.

About 4 inches of water is rained in Jaipur in three hours. Due to heavy rains, water has been flooded everywhere. Due to water filler, there has been jam at every place. Many two-wheelers were washed away due to the strong currents of water. Trains have stopped on the beach road due to the filling of water. Things have started deteriorating in Jaipur’s Ramganj and Johri Bazaar. In three hours flood conditions have been created in the boundary wall. The houses have been flooded for about 3 feet. Chattan has fallen due to rain on the Ramgarh road, Delhi Road, after which the administration has closed the way. Flood situation has also been created in Galtaji. Disaster teams are reaching the spot. About 13 teams of civil defense have reached different places.

Apart from this, the car has been hit by 22 warehouse wall collapses. A piece of the Central Park wall has collapsed. Jai Singhpura Khor dam is also reported to have broken the wall. Pictures of waterfalls flowing from the mountains are coming out. The Statue Circle of Jaipur is also full of water. The District Collector has appealed to the people to stay at home.