Another major promise of BJP fulfilled in Modi Raj 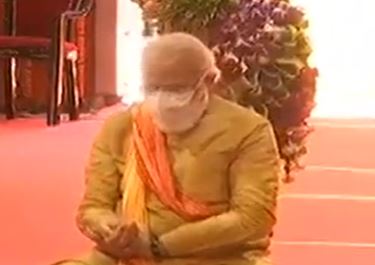 The BJP once had to leave behind the controversial issue of Ram Mandir for its allies, but today the foundation stone of the same temple is to be laid. This work will be done by PM Modi himself, who had an important role in Advani’s 1990 Rath Yatra.

The New Delhi
BJP once had to leave behind the controversial issue of the construction of a grand temple of Lord Ram (Ayodhya Ram Mandir ) in Ayodhya to woo its allies at one time , today its construction began with its ideological victory over its opponents. Appeared in the form. Even many opposition leaders are welcoming it. Incidentally, on the day Prime Minister Narendra Modi will lay the foundation stone in the presence of Mohan Bhagwat, the head of the Rashtriya Swayamsevak Sangh, who is leading the Hindutva movement, the first anniversary of the repeal of Article 370 from Jammu and Kashmir will also take place is.

On August 5, a year ago, by abolishing Article 370, the BJP fulfilled its other major promise related to ideology. Political experts say that the major political presence in the foundation stone to be held on Wednesday is that of Prime Minister and Uttar Pradesh Chief Minister Yogi Adityanath. Both are suitable for this as both are known for their unwavering loyalty to Hindutva.

Modi had an important role in Advani’s rath yatra
Let us remind you that as the BJP’s national officer, Modi played a key role in the ‘Ram Rath Yatra’ of senior leader LK Advani in 1990, while the late Mahant Avaidyanath, Guru of Adityanath, formed a group of sadhus and Hindu organizations formed in 1984. Had contributed significantly to the temple movement. It is believed that in 2019, the Supreme Court gave a decision in favor of the construction of the temple where the birthplace of Lord Rama is a legal stop to the historic dispute between Hindu and Muslim groups, while the construction of the temple started to further strengthen the Hindutva sentiments. Can.

Beginning to unite Hindu organizations
, a BJP leader said, “Ayodhya issue used to be a political issue for us long ago. It has always been a matter of faith for us. In our manifestos in all general electionsThe promise to construct the Ram temple and abolish Article 370 shows our commitment. Now that both the promises have been fulfilled, obviously we will discuss it. “By the way, the Ram Janmabhoomi movement for the construction of Ram temple was conceived in 1984 by Vishwa Hindu Parishad under the leadership of the late Ashok Singhal and for this It was the beginning of uniting the sadhus and Hindu organizations.

There was a lot of politics after the ‘Ram Rath Yatra’
The issue has emerged in political circles since the “Ram Rath Yatra” started in 1990 under the leadership of the then BJP President Advani. After this, the BJP openly came in support of Ram temple. In 1989, the BJP session in Palampur resolved to build the Ram temple for the first time. Advani started his famous Rath Yatra at Somnath Temple in Gujarat. His visit is also seen as a cut off of Mandal’s politics started in 1990 with the aim of reservation of other backward classes of Prime Minister VP Singh.

First Section 370 removed, then Ram temple construction
It was necessary for the BJP to come to power in the coalition era of 1989 to 2014 by nurturing new allies. After the BJP came to power in 2014 under Modi’s leadership, the party showed firmness in its commitment to its core issues. This was the first time the BJP got a majority in the 543-member Lok Sabha. This time he was not pressured by the collaborators, as was the case with the alliance in the Vajpayee era. In the 2019 elections, the BJP got a bigger mandate than before. After this, the party was seen moving forward on its core issues with new energy. This shows the repeal of Article 370 from Jammu and Kashmir and moving towards the construction of Ram temple.

Earlier, senior Congress leader and former Chief Minister of Madhya Pradesh Kamal Nath also welcomed the Ram temple. BJP leader Amit Malviya said that in view of the foundation stone ceremony, now “mentally insolvent” leaders are suddenly paying tribute to Lord Ram. It is important to remind them that the BJP is the only political party for which the construction of the grand Ram temple has been a matter of faith.