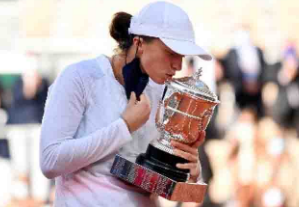 19-year-old Eega Switake has become the new queen of world tennis. This Poland player has won the French Open title. Ega Switek has created a new history with this victory. She has become the first player from Poland to become the French Open champion. Ega Switzek defeated America’s Sophia Kenin in straight sets in the women’s singles final on Saturday. Not only the final, he did not lose a single set in the entire tournament. This is his first Grand Slam title.

Ega Switchek landed at the French Open as an unseeded player. Obviously, no one was expecting that she would reach the finals or win the title. But this 19-year-old girl decided that in the year 2020 she is going to be twenty at all. Leave the match, this player did not lose a single set in the entire tournament.

Ega Switzek defeated America’s Sophia Kainin in straight sets in the final played on Saturday. He performed brilliantly and beat Sophia 6-4,6-1. Like Ega, Sophia Canin also reached the final of the French Open for the first time. But his dream of winning the title could not be fulfilled.