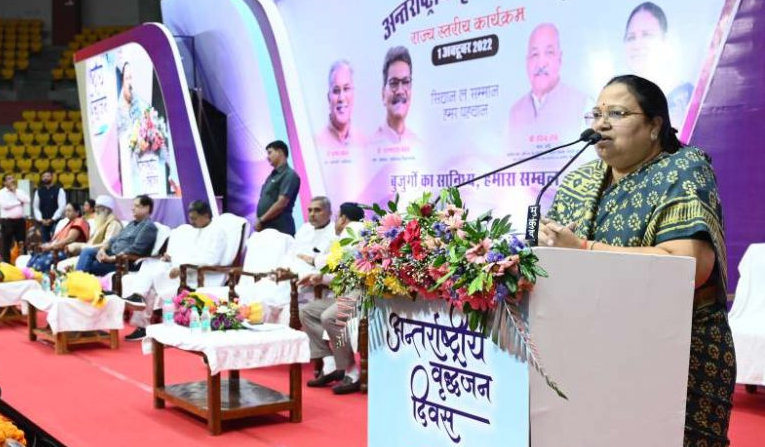 On the occasion of International Day of Older Persons, a state level felicitation ceremony was organized by the Social Welfare Department at Sardar Balbir Singh Juneja Indoor Stadium in Raipur today. About three thousand elders from different districts including Speaker of the Legislative Assembly Dr. Charandas Mahant, Social Welfare Minister Smt. Anila Bhendia, Chairperson of Chhattisgarh Yoga Commission Shri Gyanesh Sharma participated in the program. On this occasion, 16 senior people including Sufi singer Padma Shri Madan Chauhan and social worker Padma Shri Smt. Shamshad Begum were honored with shawls, shriphal and insignia for their remarkable contribution towards the society. The program started with lamp lighting and Raj Geet. In the ceremony, the magazine Cognizance, published by the Senior Citizen Welfare Forum, published by the Senior Citizen Welfare Forum was also released by the guests. All the elders who came from the districts were honored with quince shawls and walking sticks. It is noteworthy that International Day of Older Persons is celebrated every year on 1 October to develop a positive environment in the society towards the safety, protection and respect of senior citizens. In the same vein, a state level function was organized in the capital. While congratulating and wishing the elderly on International Day of Older Persons, Minister Smt. Anila Bhediya said that the culture, respect and civilization of Chhattisgarh is related to the elderly. The practice of living in a collective family is better in our state than in other states. Wishing a happy life for the elderly, he said that all possible efforts are being made by the state government for the welfare of the elderly. On the occasion of International Day of Older Persons, Chief Minister Bhupesh Baghel has made a big announcement to start SIAN helpline for the elderly from November 1, State Nirman Diwas. This helpline will help such old people, whose children are working in other places of the country and abroad, to help them in emergency situations. He said that 31 old age homes are operating in the state. From food to drink to shelter, medical arrangements have been made for the destitute elderly here. From the district to the state level, the state government has made arrangements for redressal of the elderly. For this all elders need to be alert and aware. He said that elders also have an important contribution in the development of Chhattisgarh. Blessings of elders are necessary to build new Chhattisgarh. We will be able to make the dream of New Chhattisgarh come true only with good atmosphere and everyone’s cooperation. Dr. Charandas Mahant said that the first responsibility towards the elderly rests with their children as well as the entire society. The state government has made many arrangements for the needs of the elderly including pension. Now a helpline is also being started to help the elderly. He said that intimacy and respect for the elderly is the biggest need, the youth will have to think in this direction. Shri Gyanesh Sharma said that the elderly have been greatly affected and neglected because of the nuclear family. The social fabric is disintegrating due to materialism. He said that the younger generation should take advantage of the experience of the elders. Bringing inspiration to the new generation and bring back the atmosphere of respect. He was honored – Padma Shri Shri Madan Chauhan from Raipur was honored for his art practice, Dr. Shri Chittaranjan Kar was honored for his literary practice. Padma Shri Smt. Shamshad Begum from Balod district was honored for her remarkable contribution in literacy campaign and awareness of social evils. Similarly, Mr. Nityanand Sharma of Bilaspur was honored for his active participation in cleanliness campaign, Mr. Birjhu Singh of Balrampur district was honored for cleanliness and upliftment of Khairwar tribe. Shri Navi Mohammad from Bastar was honored for making senior citizens health conscious and helping the destitute. Shri Rajuram Markam of Kanker district was honored for health camp, free treatment and Lakhmshi Bhai Bhanushali of Dhamtari for his work for the welfare of destitute children and elderly. Mr. Sarju Sahu, who was honored with Mikha Singh Samman of Balodabazar district, was honored for his sportsmanship. Shri Ashwini Gajendra of Dhamtari was honored for making women self-reliant, Gariaband Shri Nutan Lal Sahu for creative writing and activities, Shri Manga Ram of Surguja for social work during the Kovid-19 transition period. Similarly, Mrs. N.K. of Narayanpur district. Azad was awarded for the education of children, service to senior citizens and destitute. Shri Ashok Tiwari of Mungeli district was given a citation for scout education and yoga training, Shri Khem Vaishnav of Kondagaon district for his folk paintings, Shri Amar Singh Thakur of Dantewada district for his contribution in social work. Like this:Like Loading… Continue Reading