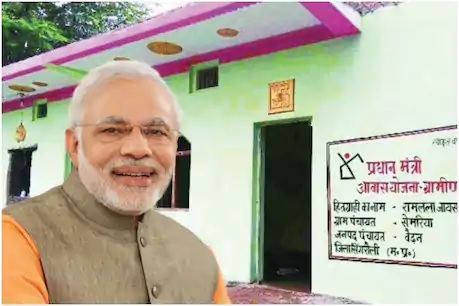 Under the Pradhan Mantri Awas Yojana (PMAY), people in Jammu and Kashmir’s Rajouri (Rajouri) have received Rs 50,000 as the first installment to build a house. Apart from this, they are getting an additional Rs 12,000 under Swachh Bharat Mission (SBM). Work was stopped under the scheme due to Kovid-19. Now construction work has started again.

Rajouri Under the Pradhan Mantri Awas Yojana (PMAY), 12,000 people in Jammu and Kashmir’s Rajouri (Rajouri) have got Rs 50,000 as the first installment to build their house. SK Khajuria, Assistant Development Commissioner (Rural Development Department) of Rajouri district said that we have set a target to extend the benefit of the scheme to 100% needy people. Under this, the first installment of Rs 50,000 has been given to 12,000 people. Apart from this, an additional Rs 12,000 is being given to the beneficiaries under the Swachh Bharat Mission (SBM).

‘All raw houses will be ready in two years’
Khajuria said that under the housing scheme, full help is being given by the Jammu and Kashmir Administration to the people to make their home. This is a matter of great relief for the poor. By taking advantage of the scheme, they can stay safe in their pucca house. Panchayat officer Abdul Khabir said that there were some people in the district who could not get their pucca house built. After the order of the Central Government, the administration has started helping them build their pucca houses. He hoped that within two years all the raw houses would be converted into pucca houses.

To ensure construction of toilets in houses built under the housing scheme, a separate Rs 12,000 is being given. Let us know that Prime Minister Narendra Modi’s government has planned to provide houses to everyone by 2022. The BJP campaigned this plan fiercely in the Lok Sabha elections 2019. The scheme is also believed to have contributed to the overwhelming victory of BJP in the elections. Recently Union Minister Hardeep Singh Puri had said that under the Pradhan Mantri Urban Housing Scheme, about 3.65 crore people will also get employment when the construction of houses starts in the country.

Village Employment Service will monitor the work
Kovid-19 has stopped the construction of houses under the PM Awas Yojana. Now after the relaxation of lockdown and restrictions, some housing construction work has started again. Under the scheme, people are given financial assistance at different times. With 50 thousand rupees received as first installment, they will be able to start construction work. After this, as the work progresses, they will get installments under the scheme. From time to time, the Gram Rojgar Sevak (GRS) will also visit the spot and take stock of the construction work. This will help the government to monitor the correct use of money.