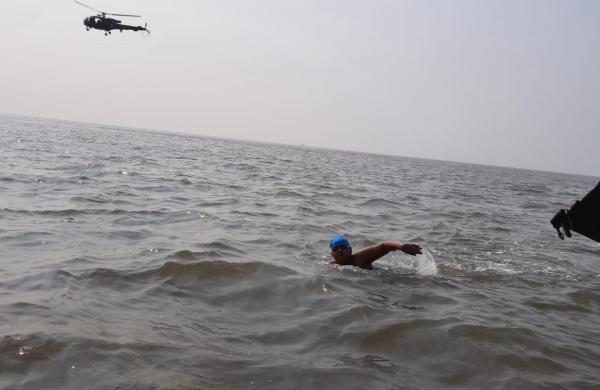 By ANI
MUMBAI: A 12-year-old daughter of a Naval sailor Madan Rai created history by swimming from Bandra-Worli Sea Link to Gateway of India, a distance of 36 kilometers, in 8 hours and 40 minutes.

The young girl Jiya Rai, who has been diagnosed with a known case of Autism Spectrum Disorder (ASD), dedicated the swimming feat, completed on Wednesday, to raise awareness about Autism, a statement released by the Ministry of Defence said.

She commenced her record-setting feat in the early morning hours on February 17 at 03: 50 am from Bandra-Worli Sea Link and completed at Gateway of India at 12:30 pm.

The swimming event was conducted under the observation of the Swimming Association of Maharashtra, a recognised body of Swimming Federation of India. The event was also associated with the Fit India Movement by the Ministry of Youth Affairs and Sports.

An award ceremony was held at Gateway of India in Mumbai on February 17 where Jiya was felicitated with a trophy by Zarir N Baliwala, President of Greater Mumbai Amateur Aquatic Association (GMAAA).

Jiya earlier swam from Elephanta Island to Gateway of India, a distance of 14 Km in three hours, 27 minutes and 30 seconds on February 15 last year and holds the world record for the youngest girl with ASD to swim 14 kilometres in open waters.