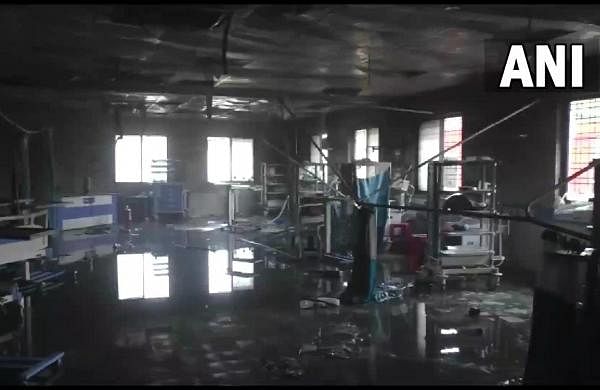 AHMEDNAGAR (Maharashtra): Eleven patients were burnt to death and several others injured when a massive blaze ripped through the Intensive Care Unit (ICU) of the Ahmednagar Civil Hospital here on Saturday, officials said.

Three to four others have been injured and are being treated.

The fire in Ahmednagar civil hospital broke out in ICU, later it spread in other wards. More than 20 people were in hospital, out of it, 10 reported to be died so far. @NewIndianXpress @Sunday_Standard
— Sudhir Suryawanshi (@ss_suryawanshi) November 6, 2021
The remaining patients have been shifted to a Covid ward in another hospital, district collector Rajendra Bhosle said. The cause of the blaze, which has now been extinguished, is as yet unknown. The preliminary investigations suggest it began due to an electrical short circuit, the collector added.

At the time of the incident, there were at least 20 patients undergoing treatment in the ICU, and scores of anxious relatives rushed to the hospital for details on their near and dear ones.

Anguished by the loss of lives due to a fire in a hospital in Ahmednagar, Maharashtra. Condolences to the bereaved families. May the injured recover at the earliest.
— Narendra Modi (@narendramodi) November 6, 2021
Though the horrific fire was brought under control around 1 p.m., eyewitnesses said the entire ICU has been reduced to a heap of burnt rubble, and the casualty figures could further increase.

Senior police, district and fire brigade officials have reached the spot and are supervising the rescue and relief operations, while the cause of the blaze, tentatively suspected to be a short-circuit, is being probed.