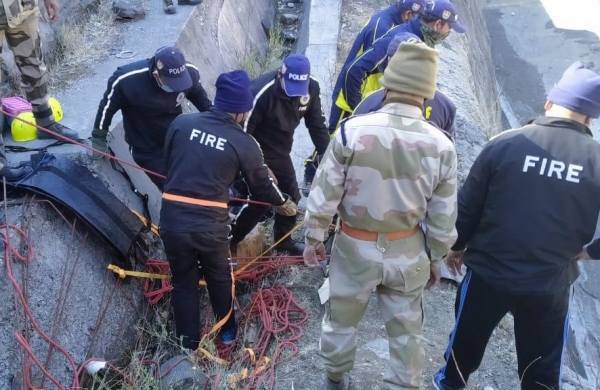 Express News Service
CHAMOLI: At least 10 people have died and 150 labourers are missing after a glacier broke off in Joshimath in Uttarakhand’s Chamoli district on Sunday, causing a massive flood in the Dhauli Ganga river and endangering the lives of people living along its banks.

The state government has announced ex-gratia amount of Rs 4 lakh as financial help to the families and dependents of the deceased.

Chief Minister, Trivendra Singh Rawat said, “All our efforts are focused on reaching people and providing relief. Our brave forces are doing their job and we have support of the whole nation.”

The disaster occurred at around 10 A.M. in the morning.

“Essential items, medicines choppers of Indian Army, Air Force and state government are on standby along with our brave personnel from state police, Indian Army, ITBP, NDRF, SDRF and others,” the CM added.

ITBP rescued 16 people who were trapped in a tunnel of a dam which is a part of a hydroproject.

Many spots where the teams are working have muck and debris deposition over 35-40 meters leaving. The rescue personnel are using ropes to reach the spots.

A tunnel which is 250 meters is being dug in only 150 meters till the time of writing this report.

The state government has already issued alert till Rishikesh and Haridwar due to expected rise in various rivers due to flooding by the lake burst. Parts of neighbouring state of Uttar Pradesh have also been alerted due to possible rise in the levels of river Ganga as well as its tributaries.

In total, 17 villages have been completely cut off as five bridges connecting to those have been washed away in the disaster.

Out of the 17, residents of seven villages had migrated to lower altitudes for winters, said the officials.

Counting the losses, officials added that local shepherds along with 180 sheep and goats were engulfed by the floods.

Damages have been reported at Tapovan dam at Alaknanda river as well as 13.2 Megawatt Rishiganga hydropower project. Total 176 workers were working in both the projects.

To prevent the levels of Alaknanda river and others, flow of Bhagirathi river has been stopped by closing the gates of GVK dam in Srinagar and Virbhadra dam in Rishikesh.

Chief Minister Rawat visited Tapovan and Raini village to review  the situation on the ground with the officials.

Meanwhile, Prime Minister Narendra Modi spoke to the CM and has assured every help.

“Am constantly monitoring the unfortunate situation in Uttarakhand. India stands with Uttarakhand and nation prays for everyone’s safety there. Have been constantly speaking to senior authorities and getting updates on NDRF deployment, rescue work and relief operations, ” tweeted the Prime Minister.

Am constantly monitoring the unfortunate situation in Uttarakhand. India stands with Uttarakhand and the nation prays for everyone’s safety there. Have been continuously speaking to senior authorities and getting updates on NDRF deployment, rescue work and relief operations.
— Narendra Modi (@narendramodi) February 7, 2021

The CM told that the Prime Minister, the President of India, union Home Minister ans various other CMs including the Yogi Adityanath from Uttar Pradesh, Nitish Kumar from Bihar and many others called and offered help.